The biggest Event of this Power Weekend has concluded, and Rodney Ramalho was crowned Champion!

Day 1 played down to 23 players, and Patrick St-Onge ended that day with the most chips. He ended up busting in 10th place, after a series of unfortunate events. Our 23 finalists came back today money hungry, but Rodney Ramalho had the biggest feast.

He took out most of the finalists, starting with Jason Conforti. That was the hand that sent Ramalho far ahead in the lead, and he never looked back since then. After taking out Nick Nickoletopoulos, he played Albert N heads-up for the title. That match did not last long. He just leaned on Albert, eroding his stack for a while, until it was doubled up to 750K.

Then the final hand happened. Albert raised the 16K blind to 35K, which was 3-bet to 85K by Ramalho. Albert then went all-in, and that bet was called instantly by Ramalho, who had the goods.

A very nice performance by both players. Congratulations! 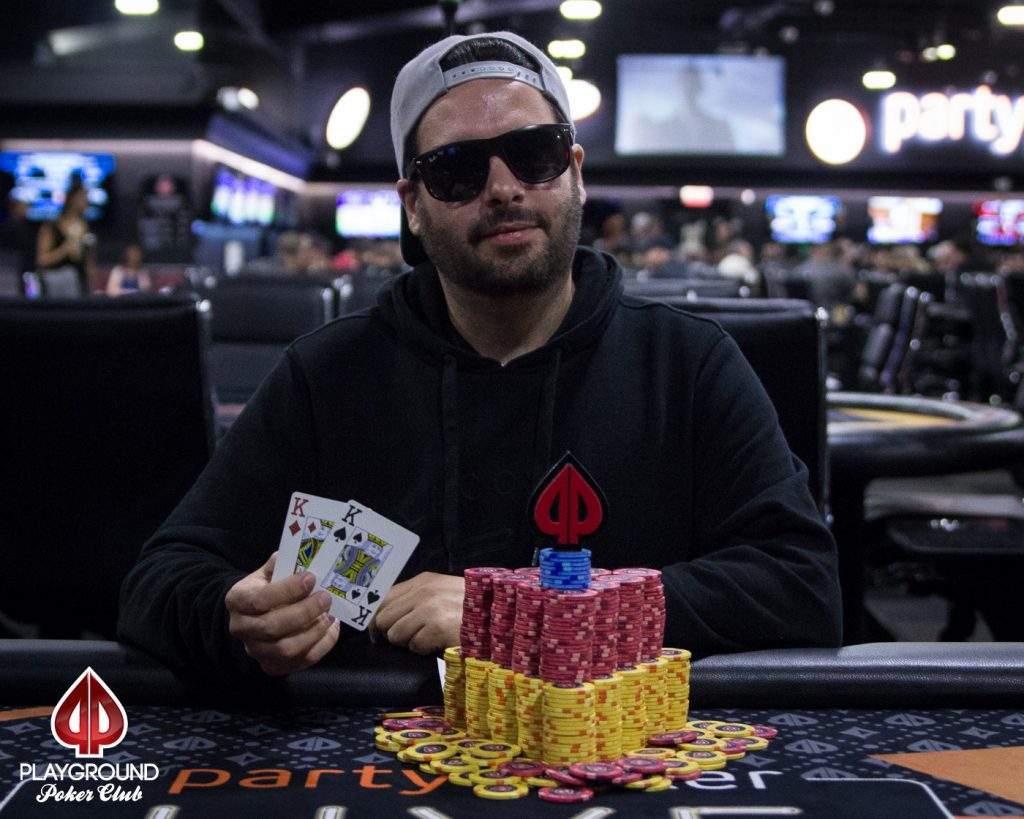 Nick Nickoletopoulos, Rodney Ramalho and Albert N had been playing 3-way for a few orbits, when Nick completed his small blind to Ramalho’s big blind. Ramalho raised to 41K, and Nickoletopoulos 3bet all-in for about 380K. Ramalho called right away, and they went to the board:

Simon Pin-Disle raised from the button with a King-Queen, and was 3-bet all-in by Albert N, who was holding Tens. Albert flopped a set, and Pin-Disle was drawing dead on the turn.

Shortly after, Carter Swidler (title picture), possibly the most experienced tournament player in the field, found himself another victim of Rodney Ramalho. Swidler opened that pot, and was 3-bet to 75K by Ramalho who was on the button. The flop was check-called by Swidler, who invested 85K on it. The turn was checked by both, and Rodney went all-in on the river, after Swidler checked again.

Carter Swidler tanked for a bit on the all-in bet, a deterred look on his face. When he called, Ramalho tabled

for flopped trips, which was good enough for the knockout.

Then it was Alex Phung’s turn to fall. His

. They were all-in pre-flop, and neither hit the board.

First, Adam Hussen left the table, a victim of Rodney Ramalho and his massive stack. Hussen got it in pre-flop and ahead, with

completed a straight, he was done for the day.

The next shortest stack belonged to Co Tran. He was on the button when Carter Swidler raised to 23K from the high-jack. He only had about 70K left, so when he looked at a suited ace, he elected to go in after some deliberation.

Tran was teased with a pair of 7s on the flop, but went on to suffer a runner-runner flush scenario. Congratulations to both for a very nice performance!

The tournament is now on break, and we updated the counts of our final 6:

It seems like Manfred Gunther had been card dead for quite some time, when he finally pushed his chips forward. Anyone who played with him knows that he is not the type to wait around for premium hands. Yet he had been very quiet, and had to pay quite a few blinds. In the end, he went all-in from a middle position with

, and his 55K were called by Nick Nickoletopoulos from the big blind. He was holding

Shortly after the final table was formed, Jason Conforti and Rodney Romalho got in a monstrous hand. Conforti’s

flopped a nut flush draw. The pot grew on that flop, and all the chips went in on the turn after Ramalho hit the nuts. At that point, Conforti had the 2 best pairs and a queen-high flush draw, but little did he know he was reduced to 4 boat outs, which did not come.