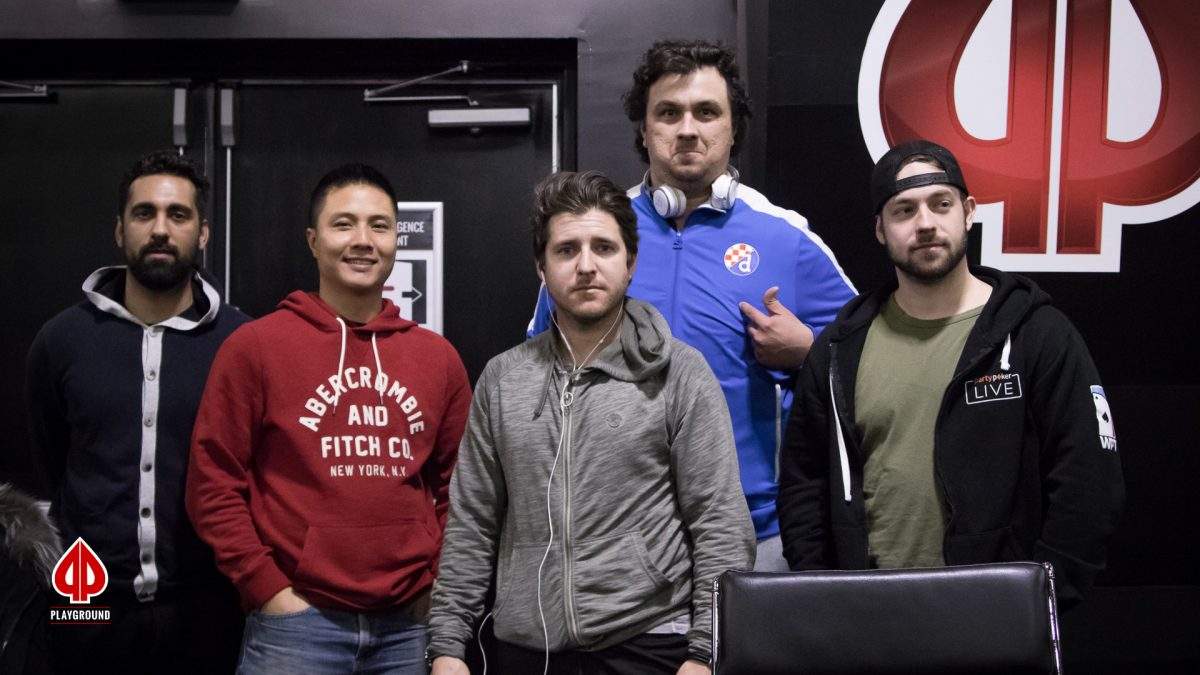 The 7 players still in the action were not going anywhere. For more than 3 levels, no one got sent to the rail. There were always two or three short stacks, but all their all-ins and/or their shoves went their way and they stayed in play. With the 6th place bringing in a hefty $8,500 cash prize, no one wanted to leave with empty hands in 7th position. There were a few discussions that took place, about maybe taking some cash from the 6th place and making a "bubble", but there was no agreement END_OF_DOCUMENT_TOKEN_TO_BE_REPLACED 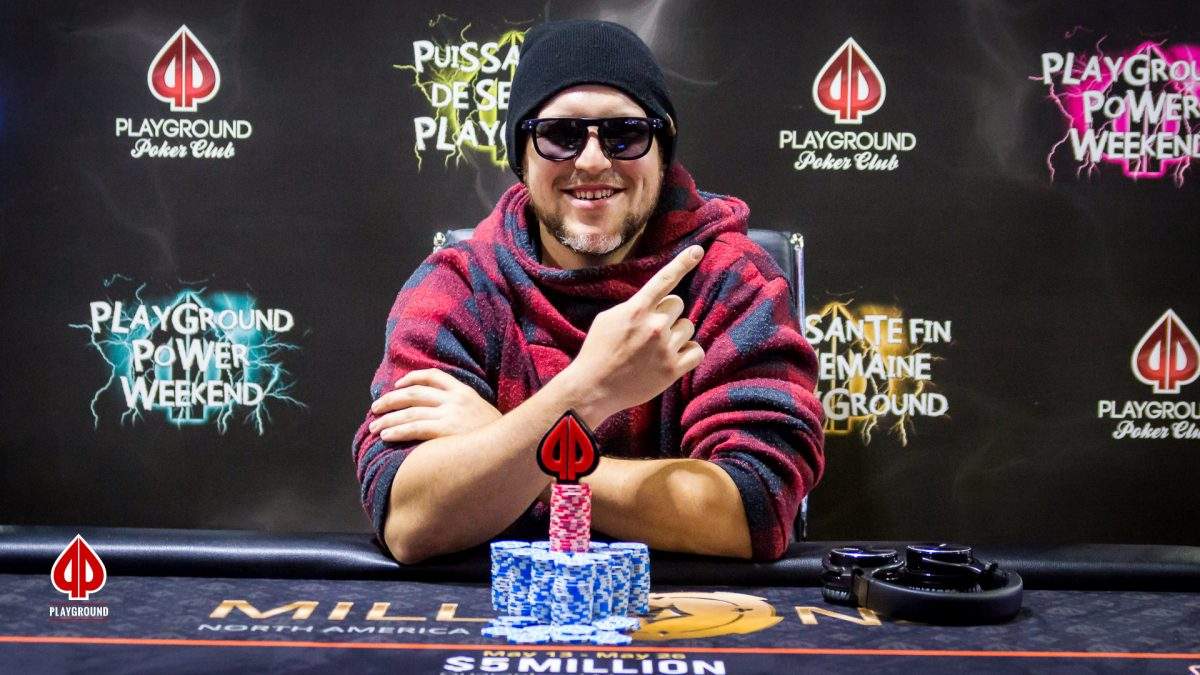 It all started at noon today and by the time the late registration period was over, there were a total of 78 players (including 17 re-entries), which allowed the prize pool to swell to a total of $7,326. 10 players were to be paid today. As the 6-max is an aggressive and fun format, the lead shifted from one player to another throughout the course of the day. When the tournament had funneled down to 7 players, the final table was formed. Being the last day of the March Power Weekend, many END_OF_DOCUMENT_TOKEN_TO_BE_REPLACED 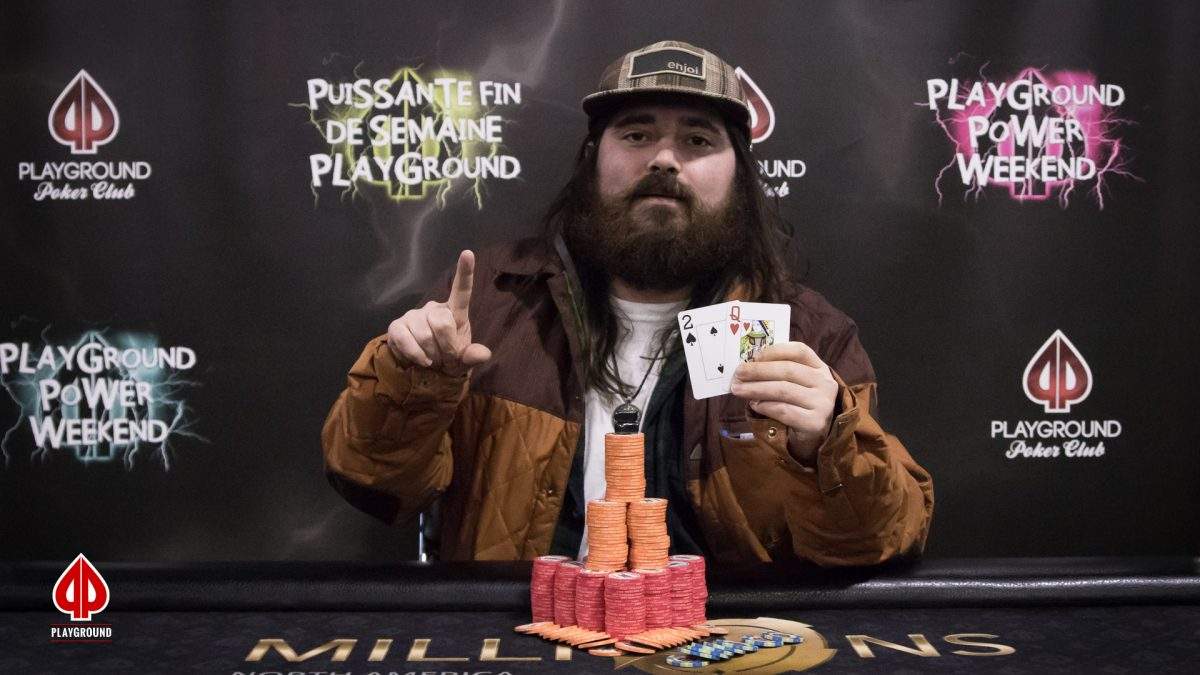 The heads up match between Charan Malhotra and Nicholas Soller lasted three levels.  The chips were exchanging hands every now and then, but mostly, both players were waiting for a decent hand. Charan started with a sizable lead on Nicholas, who only had 900,000 of the total 3,575,000 chips in play.  Mid-way through the two-man contest, Nicholas doubled-up and Charan was badly hurt.  The two experienced players played back and forth for a while, never doing much harm to each other, and seemed END_OF_DOCUMENT_TOKEN_TO_BE_REPLACED 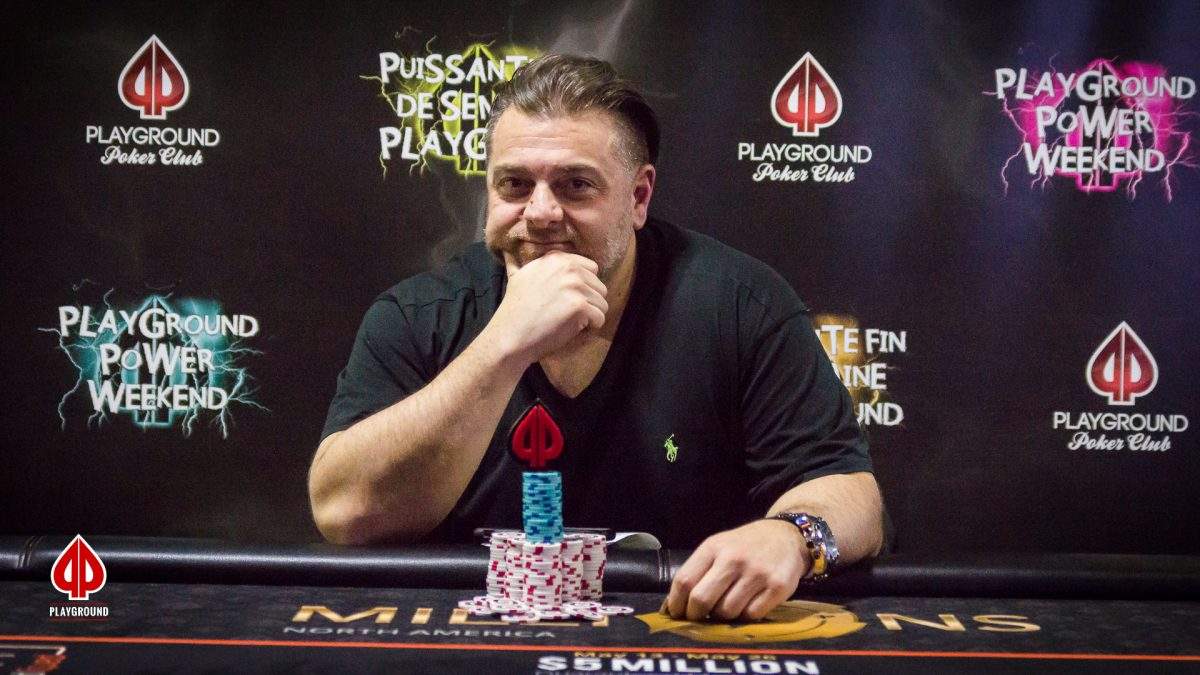 The day started at 11 this morning in the 1st event of the March Power Weekend, a $100 + $10 freezeout, which attracted 60 players, allowing it to surpass the guaranteed prize pool of $5,000, generating a total of $5,820 to be paid to the top 8 finishers. The final table saw the two who were the chip leaders all afternoon, Giovanni Petrella and Ron S., holding a substantial lead over the others. As expected, the short stacks shoved away and the field started to narrow down. Ron S. went on END_OF_DOCUMENT_TOKEN_TO_BE_REPLACED 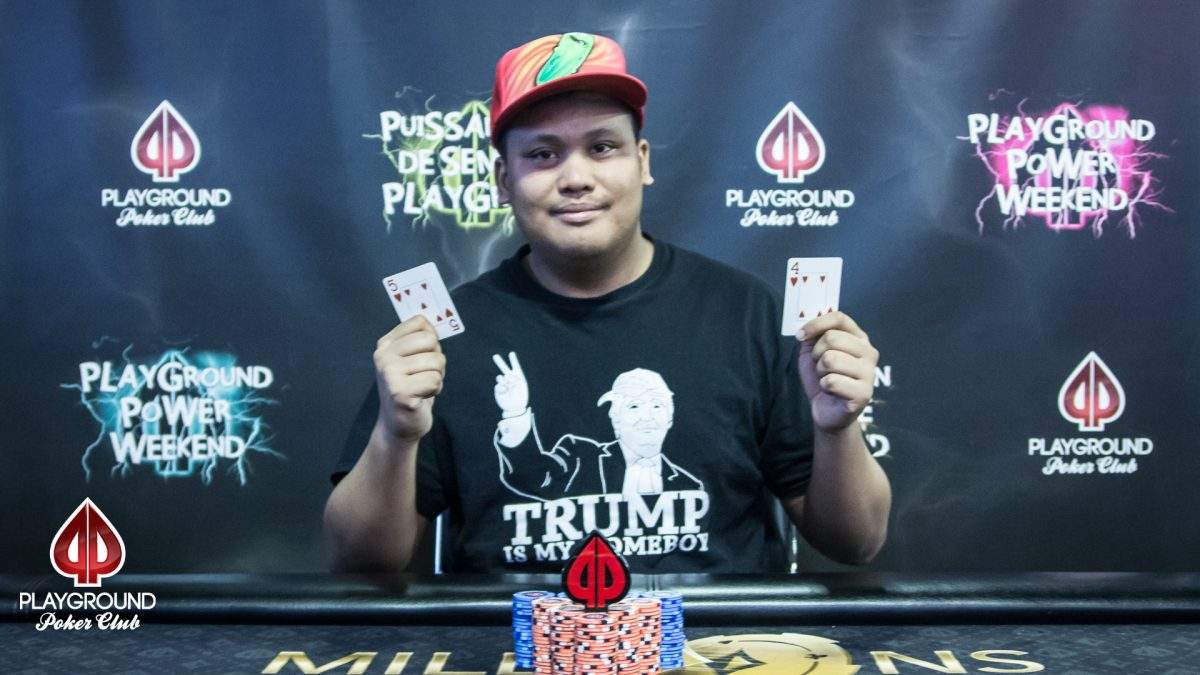 Event #2 of the March Power Weekend, the Playground 500, was a tremendous success that brought out a field of 314 entries. The great turnout smashed the $100,000 guarantee to create huge prizes at the top of the money list. Today's Day 3 started at the final table with eight players who put on a display of hard fought, determined poker. They took a cautious approach to the first two levels but there were still moments of excitement and tension, with a number of bluffs being shown at the END_OF_DOCUMENT_TOKEN_TO_BE_REPLACED 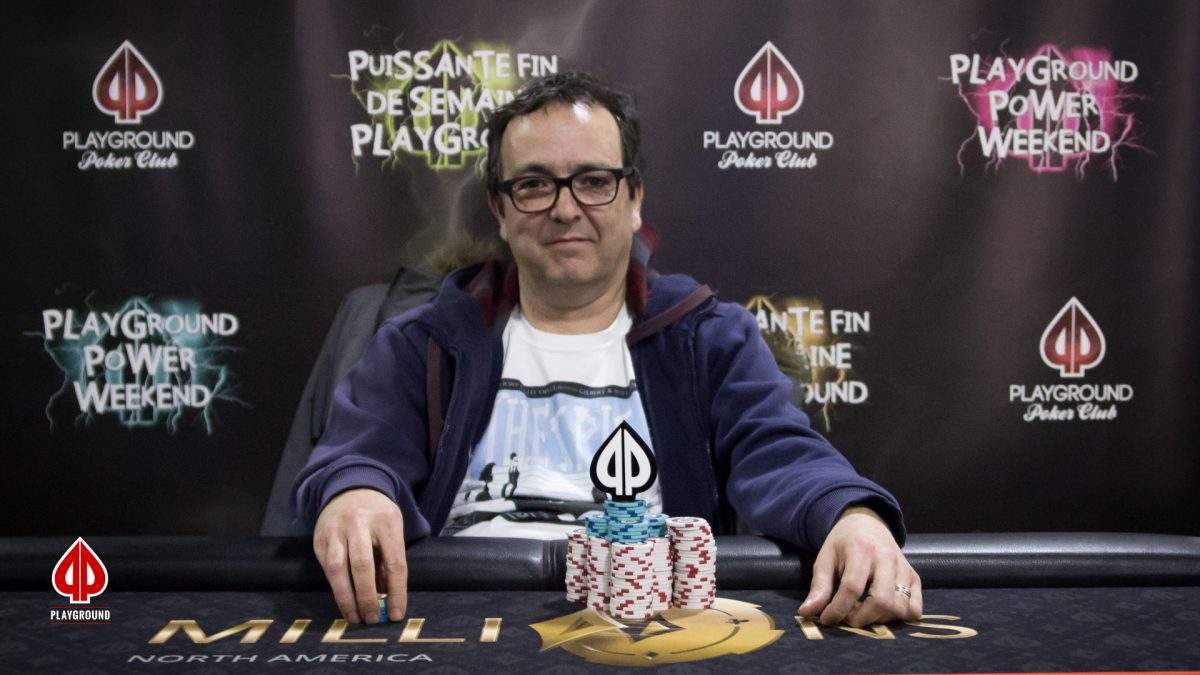 After the players returned from their short break, play resumed. Unfortunately for Harrison Kaczka, his luck was not changing. He tried to grind, fold and squeeze some value from the little hands that were favorable to him, but to no avail. Eventually, he just ran out of chips. He decided to go all in when he had 85,000 chips left, and Jean-René made the obvious call. In the end, all it took was a pair of jacks to crown Jean-René champion. Jean-René Gonzalez: 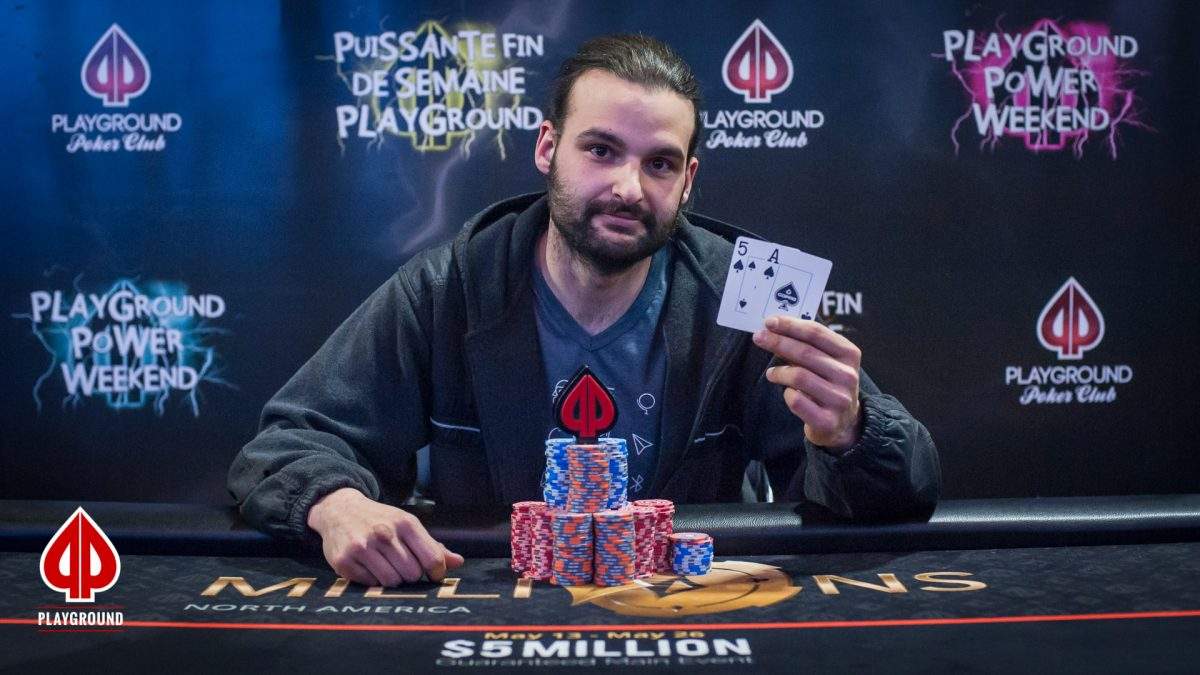 The PG100 was one of the highlight events in the March Power Weekend, boasting a guarantee of $25,000 over 3 starting flights. A total of 496 entries took place, nearly doubling the guarantee, of which 51 made Day 2 - all of which were "in the money". The day started with heavy action as many short stacks sneaked their way into the money, and with this pressure now off their shoulders, they were able to open up their game in an attempt to make their way to the final table. After 8 levels END_OF_DOCUMENT_TOKEN_TO_BE_REPLACED 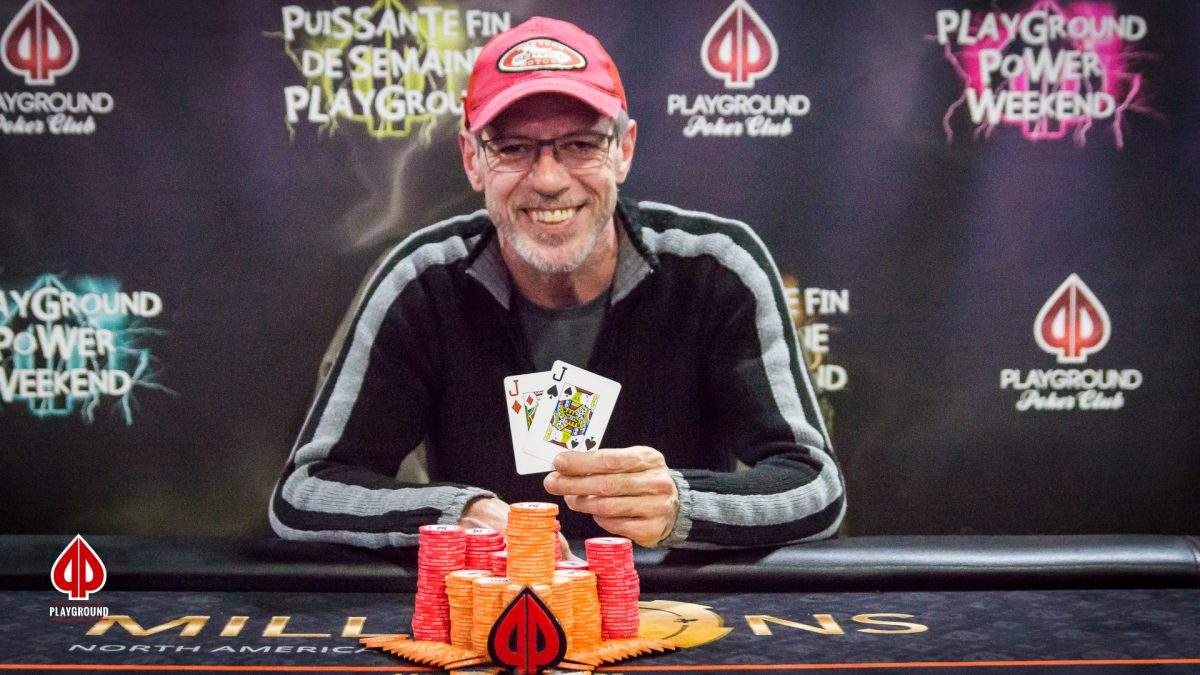 After Peter doubled up with his

hand, he was sitting on a 1mil+ chip stack and he kept the pedal to the metal and shoved the next hand. Patrick made the call. Peter had shoved

and was called by Patrick with

.  Once again, Patrick was way ahead.  The board came

, Peter hit his J and again Patrick lost with the best hand pre-flop, and Peter was now over 2mil in chips. Then Peter raised it up on the next hand to 400k, Patrick shoved his stack, and END_OF_DOCUMENT_TOKEN_TO_BE_REPLACED 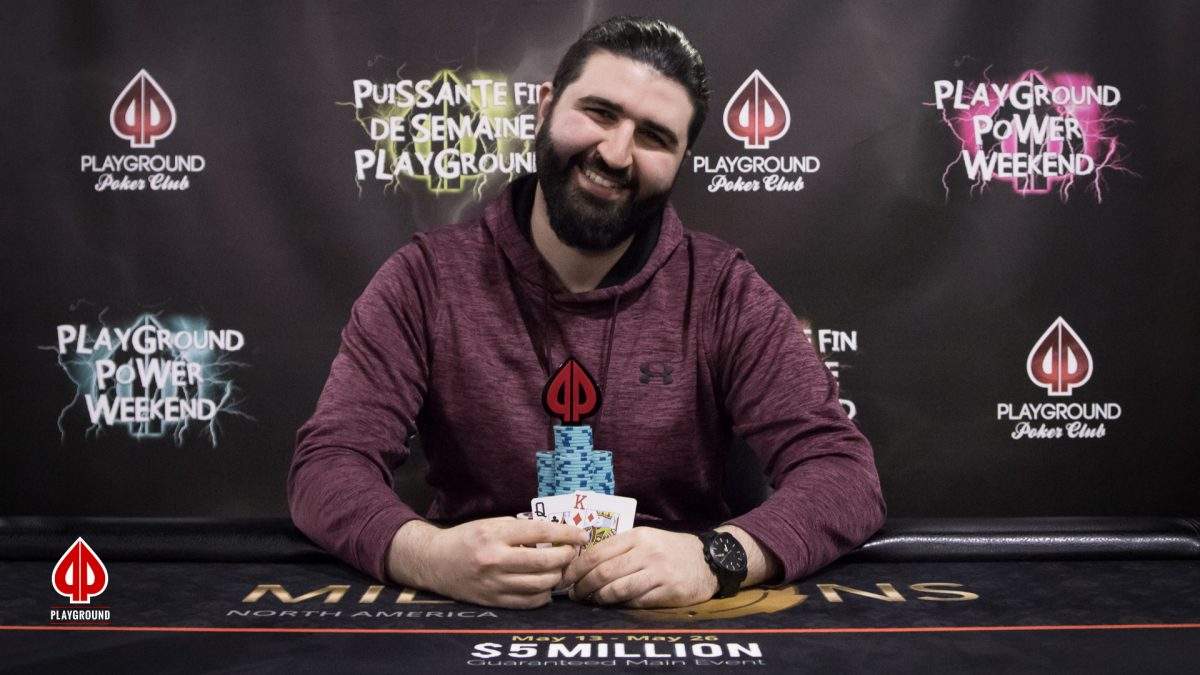 The heads up action between Dany Debs and Serge Roy was cool and relaxed. Both players exchanged chips, went all-in, folded, and let the button go back and forth for about 20 minutes. But before long, Serge was running out of chips. His options were limited and something had to be done. He shoved all-in with his remaining chips and Dany made a swift call. Both men tabled their hands. Dany:

The flop included a pair:

on the turn gave each END_OF_DOCUMENT_TOKEN_TO_BE_REPLACED