Event 3 was  $50 + $10 NL Hold’em Rebuy Event, a format that spells early action. 84 players took part, and 33 rebuys were accounted for. Of course, this means that a lot of chips were in play, and many big stacks showed up at the final table, led by Danick Landriault and Azizul Haque.

With 9 prizes on the payout table, it was decided that every finalist would get a piece. $10 were subtracted from all 9 amounts, and the 10th place finisher would go home with a 50% profit on his investment. Later on, An ICM chop was concluded by the remaining 3 players. Azizul Haque was on his 2nd final table in a row. That’s 2 for 2! He came in 3rd in both.

Karen Beecraft and Michael Mannucci played heads-up for about 10 minutes. They traded a few small pots, until they had a major pre-flop confrontation. They went to showdown:

Beecraft only had a few chips left, which were lost on the following hand (pictured below).

Mannucci came to the final table with an average stack, and played a very solid game. He did take out 2 very short stacks, but was not involved in any big pot until he won a flip against Danick Landriault to take him out. He just sailed upstream, and finally claimed the title. 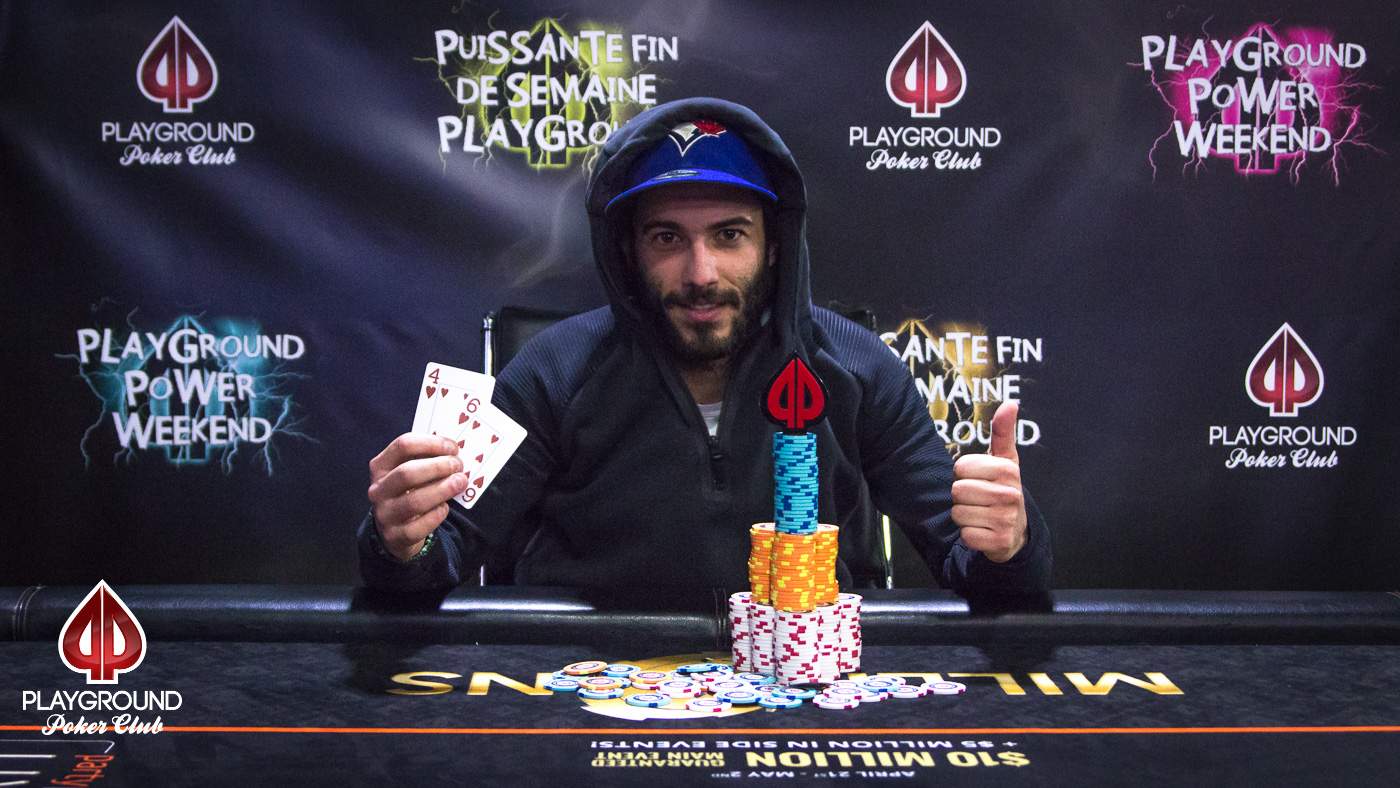 When 3 players were left, an ICM chop was agreed upon. $120 was left up top for the eventual winner, and the rest was divided as follows:

After taking 3rd place in Event 1, Azizul Haque came back this afternoon with a lot of confidence, and it sure helped him along the way. He came in 3rd again, this time outlasting 81 players! Surely he will be back for more this weekend.

Haque was doing well, until a tricky play backfired on him. He limped in from the button, letting Karen Beecraft see a flop. Beecraft led with a 40K bet, which was raised to 100K. That amount was 3bet to 200K, and Haque went all-in.

He managed to double what he had left against Michael Mannucci, but then busted when Beecraft called his all-in on flop, in a limped pot, with a monster draw:

Running trips ended his tournament. He took $1,140 for his 3rd place. An unbelievable repeat performance for Haque.

Danick Landriault had lost a good chunk of his stack against Michael Mannucci when he called 50K on the turn and 100K on the river, only to find that Mannucci had been baiting him with kings.

The hand after, chip leader Mannucci open-shoved, first to act. Landriault had about 400K left. He looked at Karen Beecraft’s stack, which was about 150K, thought for a while, and decided to go for the gold. He called.

Danick Landriault walked in 4th with a $640 coupon. Well done!

Alexandre Perreault pushed his 47K, or about 3 big blinds, to the center. Danick Landriault flat-called the bet from the button, hoping to get some value from the blinds, but they got out of the way.

Landriault is now ahead with over 600K. Azizul Haque follows with over 400K.

Michael Wesley Wilkinson, had about 120K left when he decided to push those chips forward from the under-the-gun position. Unfortunately for him, he was isolated by Karen Beecraft who had been dealt a monster in the cut-off.

Wilkinson rivered an irrelevant pair, and took $370, the 6th place money, for his efforts.

Three quick eliminations took place. They all occured within 5 minutes.

First, Cole Cross-Lusignan went out in a blaze when his top pair + flush draw fell to a dramatic river.

This fiasco was followed by the elimination of Mathieu Daigneault. He lost an all-in against Danick Landriault, the player who had chopped him up earlier.

Immediately after that, Marc Lacroix, who had been holding on to a micro stack for while, finally committed his chips. He picked up a monster draw on the turn, but fell short: