The last Event of the Power Weekend was a $300 + $30 NL Hold’em 6-max tournament. This very popular format attracted 91 players, and created a prize pool of $26,481. The buy-in was big enough to attract some sharks, but affordable enough to have many of our everyday tournament players in the field, making for an interesting dynamic.

The 6-max format always creates loads of action, and this edition was no exception. Many of the early leaders did not manage to make the payouts, including Nader Ammar, who had over 200K with 30 players left. His all-out style was displayed one too many times, and he suffered a fate that was shared by many tonight.

The 7-handed final table was formed with some well-known deep-run subscribers. William Blais has countless final table appearances at Playground, many of which were from high profile tournaments. Michael Levy and Sébastien labbé are also well established on the local tournament scene, while Carl Doyon, although he does not play as often as he used to, always makes his presence felt.

Play was solid on the final table, and everybody was standing their ground, but the blinds eventually caught up and gambles were dictated. When Blais left, our 2 finalists were about even, and decided to reduce the variance considerably by securing $6,000 each, leaving $1,431 on the table for the eventual winner.

The heads-up match lasted about 20 minutes. Michael Levy was playing solid, never committing too much, yet keeping the pressure. He took the lead and did not let go. In the end, he had a 3 to 1 lead over Richard Berenbaum. Berenbaum was on the button, and announced all-in. Levy called and flopped an enormous draw, which completed on the turn. Both players shook hands and congratulated each other in great sportsmanship.

Congratulations on a great performance and a very nice payday! 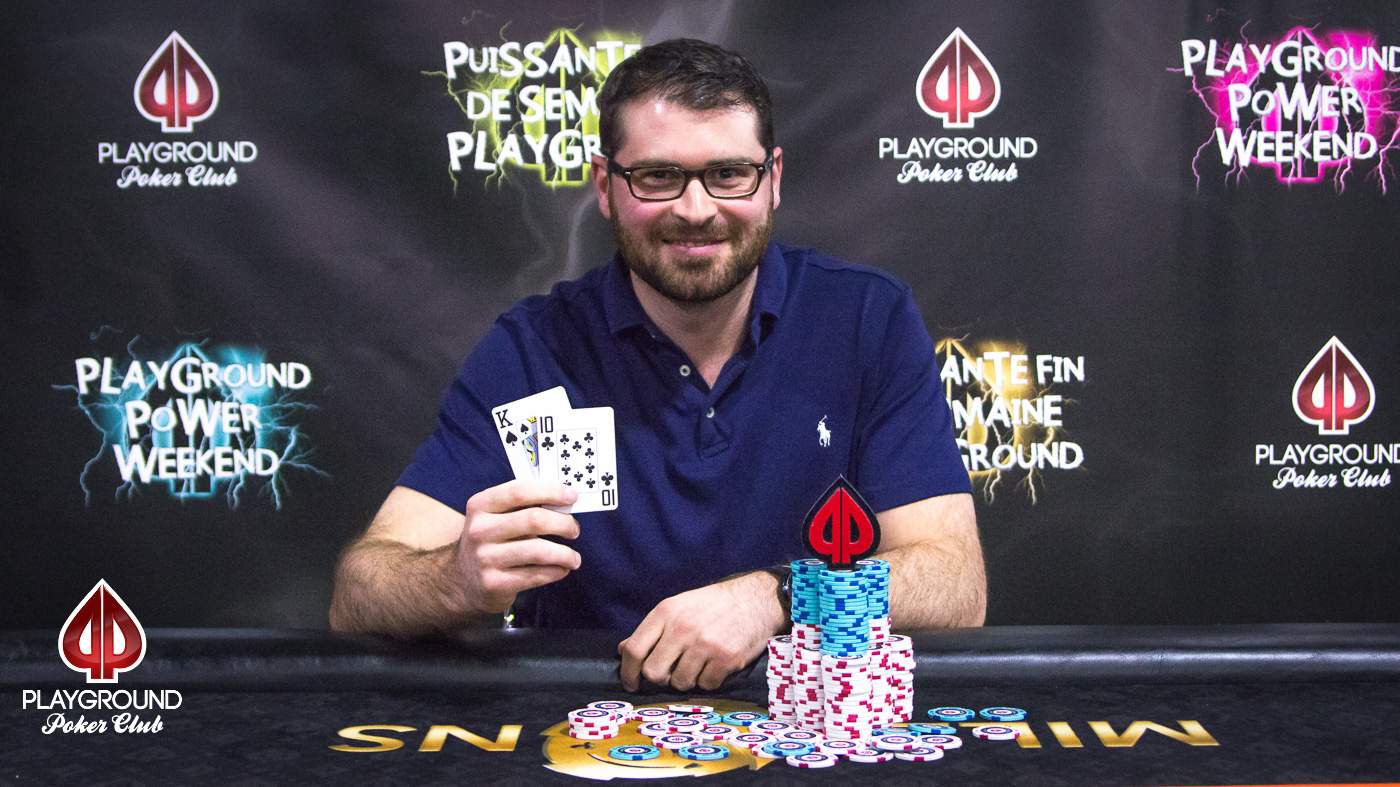 Blais was on the button with 315K. Seeing an ace in his hand was more than he needed to push his stack forward, and Michael Levy called from the big blind with a very similar hand:

Michael Levy and Richard Berenbaum, when Blais left, decided to secure $6,000 each and play for $1,431. A nice payday for all!

Nikola Isaev, from the small blind, shoved into Michael Levy. Levy hesitated for a moment, probably knowing he had to call but not liking his spot all that much.

Levy managed to avoid a chop and left Isaev with just one 5K chip. Isaev broke even on the next hand, having that chip invested on the ante, but lost the following showdown. He takes home $2,050. Congratulations!

After a 5-way dance that lasted about a half-hour and saw many changes in leadership, Sébastien Labbé was taken out. His stack did go up to over 500K at one point, but he suffered some losses, and finally decided to call off his 10 big blinds or so when Richard Berenbaum put him all-in after he limped.

Lorne Wechsler had a little over 100K left, and found an ace to push his forward. Unpleasantly for him, Michael Levy was waiting in the big blind with a monster:

Wechsler could not find an ace, and had to settle for 6th place. An excellent performance, worth $1,260. Good job!

When the action was folded to Richard Berenbaum in the small blind, he peeled his cards and went all-in. Carl Doyon thought for some time, evaluated his opponent’s range, and decided that his hand was well worth going to showdown:

Doyon was crippled to about 30K, which went in on the next hand. William Blais raised to 31K, Doyon committed his micro stack, and Nikola Isaev 3-bet to 86K. Blais called.

The flop was checked-called by Blais after Isaev bet 42K, and the 2 last streets were checked by both.

The board showed an ace, which slowed down the action considerably. Even so, with that pot, Nikola Isaev is now leading with almost 700K.