The heads-up battle between Christopher K. and Anthony Zinno had played through three full levels (halved to 20 mins each) and had remained more or less even in chips – and they were still reasonably deep – when they chose to forego a scheduled break and continue with level 25 immediately. It would only take a single hand in the level to wrap a bow around the tournament and crown a new Champion.

The cards were dealt. Anthony was on the button and thus first to act, and he raised to 1.5M holding

. Christopher, in his turn, considered his options for a little longer than usual before grabbing a stack of orange chips, moving them forward, and declaring, “all in”!

The flop was dealt:

– not much there for the Christopher’s Ace-high.

– a disaster for Anthony! His pair of 7s was counterfeited by the board and Chris’s Ace kicker took the hand… and the tournament! 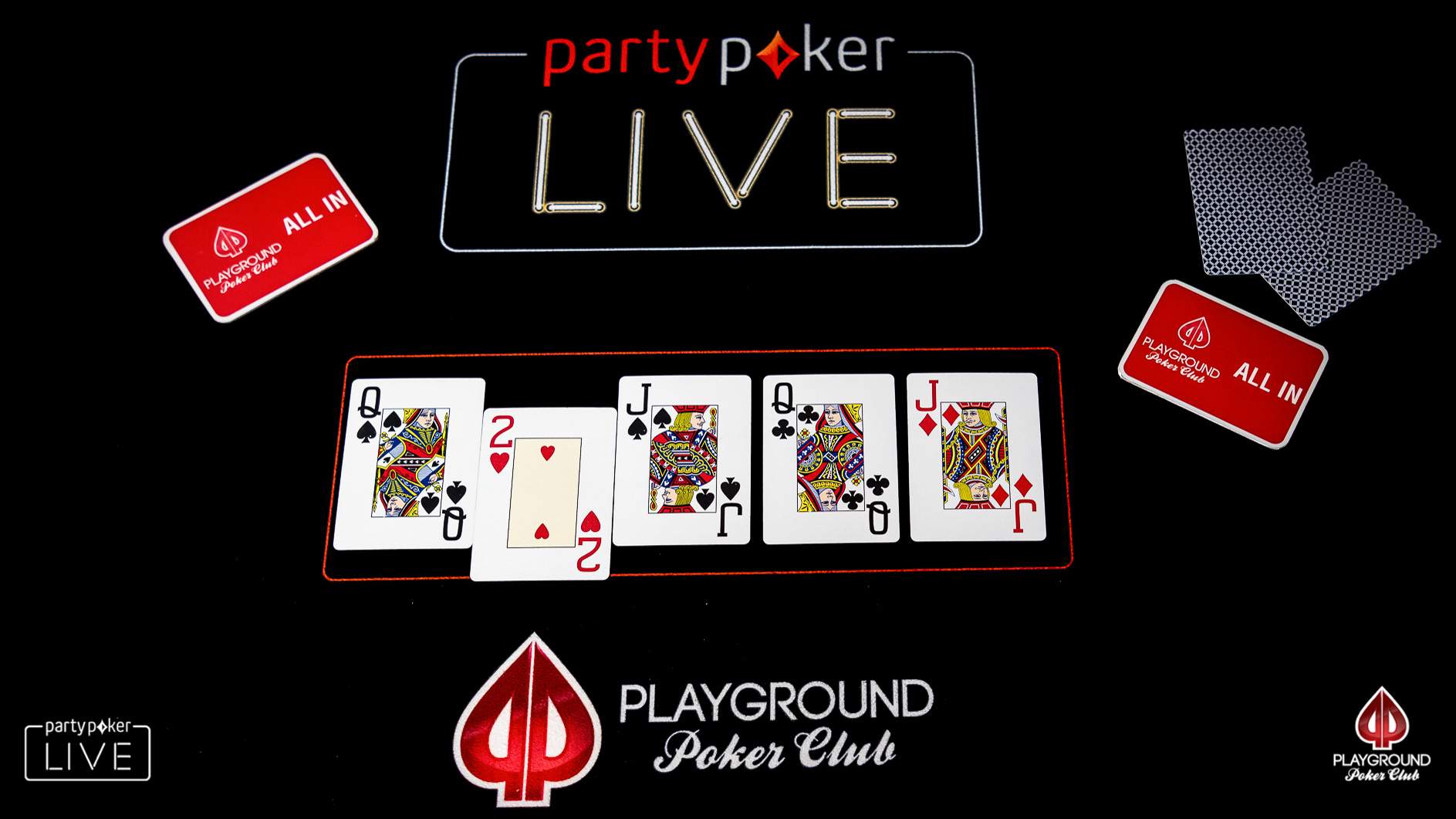 Christopher Kruk has won a big hand and re-taken the lead from Anthony Zinno by making a runner-runner straight and having his large river bet paid off. Chris was on the button and led out with a raise to 750K. Anthony made the call.

The flop came out with what turned out to be two pairs for Anthony:

. He check called Chris’s continuation bet of 375K and the dealer put out a

on the turn, giving Chris an up and down straight draw. The turn action went check check and the dealer put out the river:

– Chris had made a very well-concealed straight!

Anthony checked the river, and found himself facing a large overbet on the river from Chris. He thought for a little while, but ultimately made the call.

Christopher Kruk and Anthony Zinno have finished their dinner break, the table has been re-set for heads-up action, and play has begun with just over a minute in level 21. As per the rules of the tournament, level lengths are halved with 2 players remaining, so level 22 will be just 20 minutes long. As well, antes have been suspended for HU play, so there will be only a small and big blind added to the pot prior to player action. 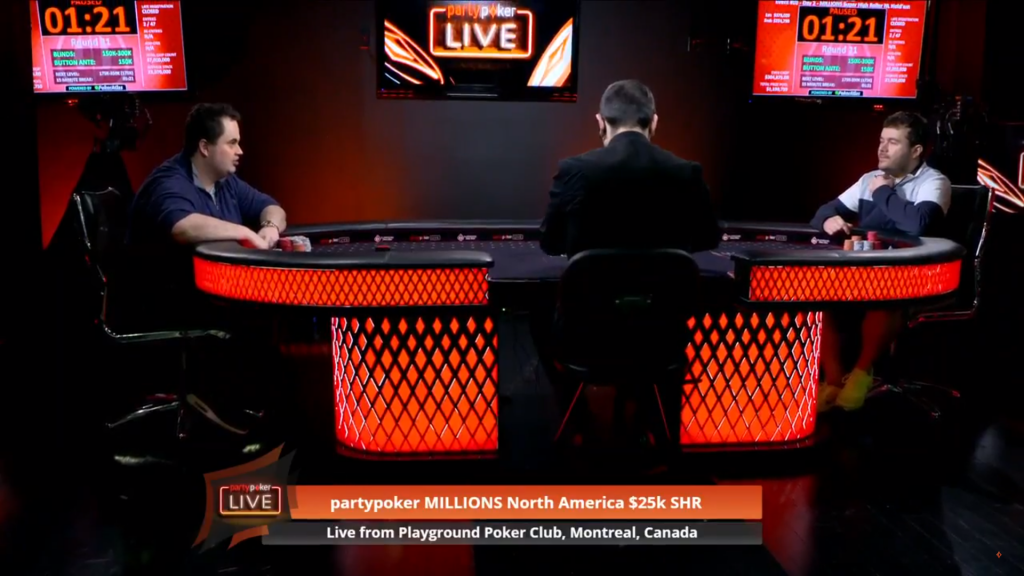 Christopher Kruk and Anthony Zinno are set to move into heads-up play, but the players agreed to take an extended dinner break earlier, and they will continue with that plan before resuming for the 1-on-1 finale to this tournament.

Darren Elias has been eliminated in 3rd place in the $25K Super High Roller Event in the MILLIONS North America. Although 3rd place came with a $165K payout, Darren is certain to be at least a little bit disappointed as he spent much of the tournament at the top of the leaderboard.

Darren opened the action from the button to 650K, but his raise was met with a 3b to 1.95M from Anthony Zinno in the sb. Kruk got out the way, and Darren raised all-in. Anthony snap called and the cards were revealed.

Darren was in the lead, but the

on the flop flipped the script, and the

on the turn and river couldn’t change the outcome. 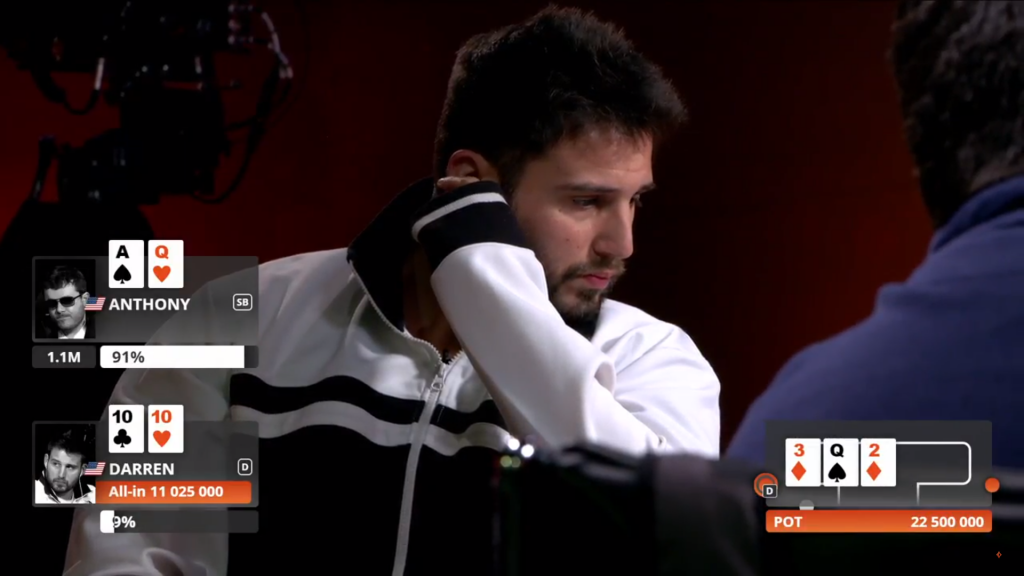 After a few minutes of back and forth action amongst the final 4 players, Chance Kornuth picked up a hand and jammed from utg for his last 3.95M. Kruk made the call and Chance was at risk.

– nothing for Chance – and the

was no help. Even though Christopher didn’t need it, he hit the 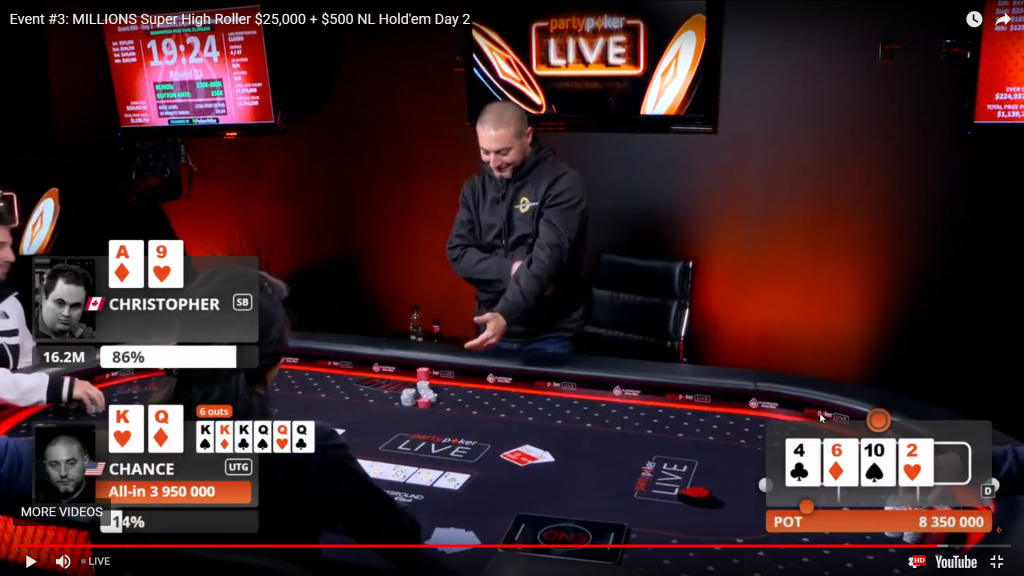