After a heads up battle that can only be described as epic, Marc-Olivier Carpentier-Perrault has emerged as the Champion of Event #4 of the WSOP-C Playground, the $5,000 + $300 Super High Roller event. Igor Picone, a young Belgian player, put up a massive fight and on several occasions looked like he might come out on top. For his victory in the event, Marc-Olivier won $100,000 plus the coveted WSOP Circuit Ring, while Igor had to settle for $67,000 for second place.

Day 2 in the event started with just 11 players remaining, and by the end of the first three levels of play on the day there were 5 eliminations, the bubble was burst, and the first three players to be paid made their exit – Pablo Mariz in 9th place, Mike Leah in 8th, and Omid Shahbazian in 7th. Play was 6-handed and Marc-Olivier had managed to build a solid chip lead on the field.

What came next was a surprise – but the players at the table seemed to be less surprised than observers. Daniel Henderson had come into the day with a huge chip lead, and even at the first break of the day was in 2nd place with over 4M in chips – but he was the next to be eliminated. In just about a single level, Daniel had distributed chips around the table, with Marc-Olivier getting the final stacks. These additional chips put Marc-Olivier in a great spot with 5 left. By the time Jason James was eliminated in 5th, however, former short-stack Dominykas Mikolaitis had accumulated some and the 4 players were relatively even.

Next to go was Jean-Serge Baril in 4th place, putting Dominykas into the lead – but it was a lead he could not sustain and he ended up on the rail in 3rd place. Play turned to the heads up phase of the tournament – which turned out to be a real battle between two clearly skilled players. Marc-Olivier started as a big chip leader, but Igor took chips hand after hand after hand, most without a showdown and many without even a flop, until he had gained a solid lead… But getting to the top only means you can be knocked down – and just at the end of level 26, Marc-Olivier won a huge pot to re-take the 2-1 lead.

Following a short break and a few inconsequential hands between the players, Igor moved all in and found a call from Marc-Olivier… who learned very quickly that he was absolutely dominated in the hand. It looked like another change in the lead was in the works.

The board runout looked solid for the Ace-Queen Igor held:

. He had top pair top kicker and the board had little in the way of good news for Marc-Olivier. There were back-door flush possibilities, and of course he could always spike a 6… or it could go like this:

Marc-Olivier had made the runner-runner straight for the win! 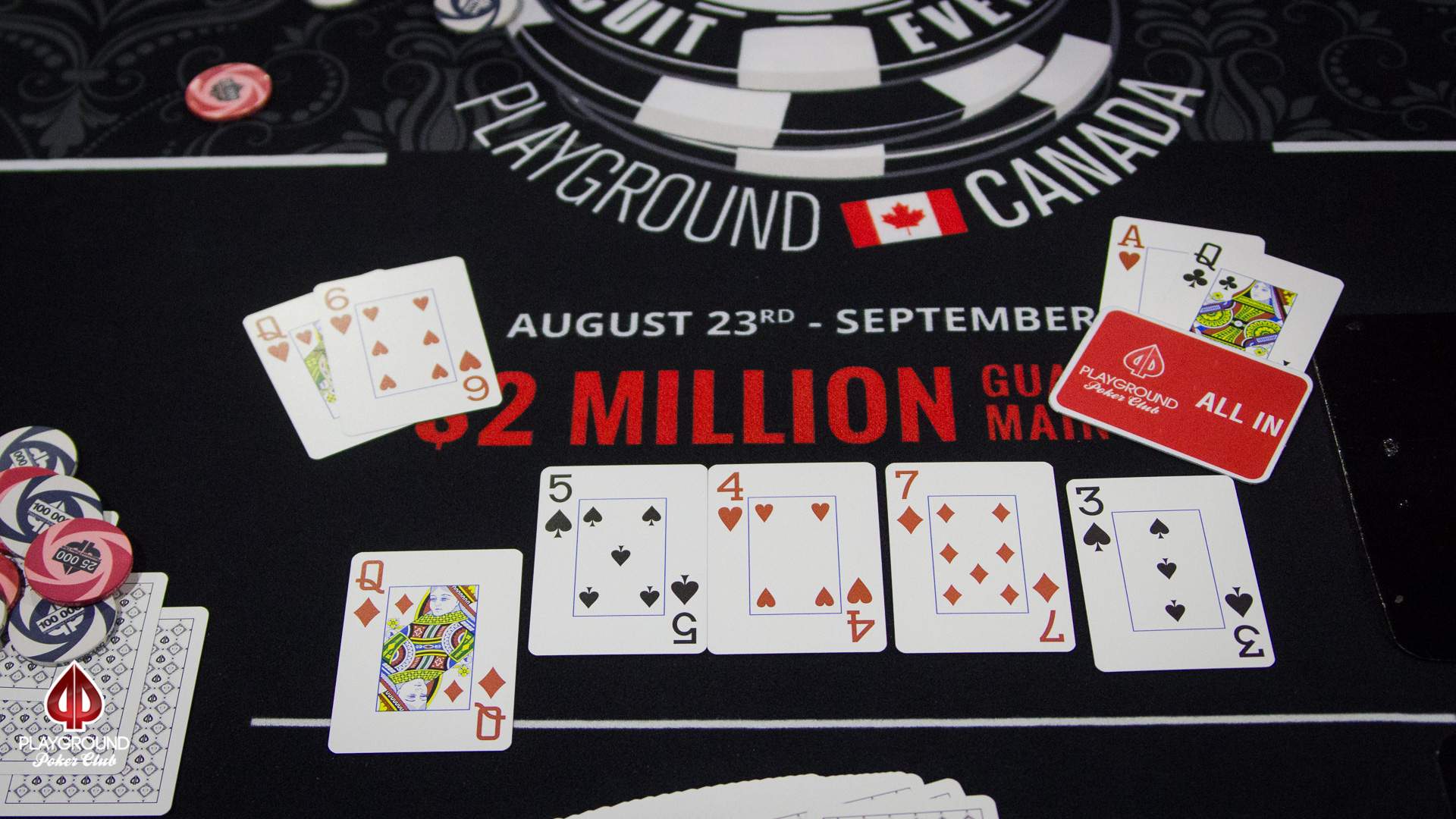 Marc-Olivier Carpentier-Perrault and Igor Picone are playing heads up for the victory, the biggest prize money, and the WSOP-C Ring.

Play has continued with 2 remaining in the tournament for more than 3 shortened levels at this point, and Igor has proven to be very skilled at this format of play – through constant aggression and some interesting variety to his play, he has more than made up for the 2-1 deficit he was hindered by to start with.

In fact, he managed to take the lead for a while – though Marc-Olivier doubled back through him to regain the lead going into level 27.

The players are currently taking a short break and will return shortly with Marc-Olivier playing just over 12M while Igor is playing just under 6M.

Dominykas Mikolaitis has been eliminated in 3rd place in the WSOP-C Playground Super High Roller and play is now heads up between Igor Picone and Marc-Olivier Carpentier-Perrault.

In his elimination hand, Dominykas raised his button to 500K and Marc-Olivier immediately raised all in – and found a quick call. Dominykas had grown his stack quite a bit compared with earlier in the day, but was still covered by Marc-Olivier by some margin. The cards were exposed:

– there was nothing in it for Dominykas and he was out in 3rd place.

There are just 3 players remaining in the $5,300 tournament in the WSOP-C Playground, and in the last few minutes of play before the most recent break, Marc-Olivier Carpentier-Perrault has re-taken the lead in the tourney. 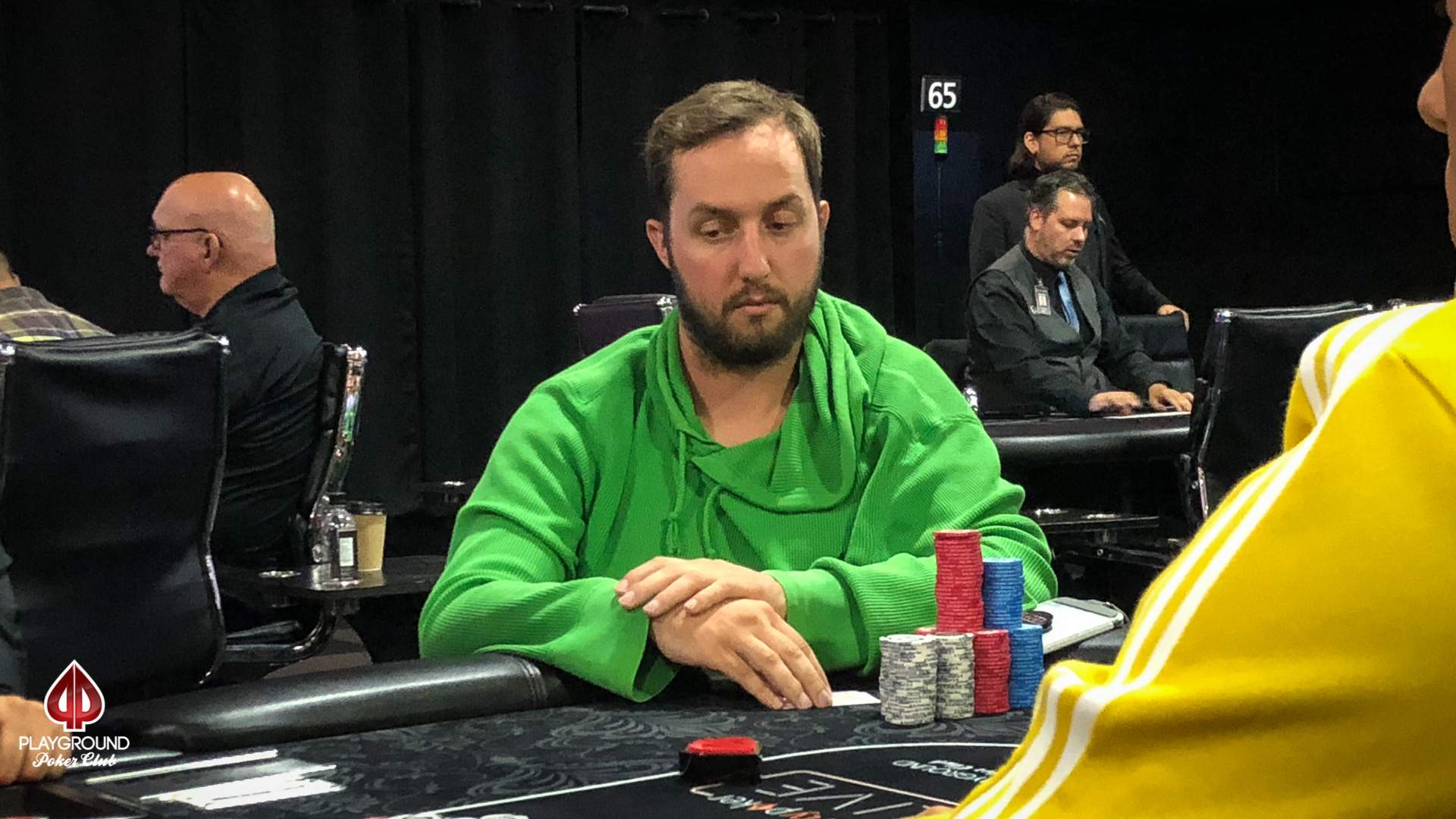 Jean-Serge Baril has been eliminated in 4th place in the SHR for $40,000. Dominykas Mikolaitis of Lithuania was the beneficiary, and has now moved into a commanding lead with 3 players remaining with a stack of 9.1M in tournament chips.

After unremarkable preflop action, the flop was dealt

and Jean-Serge check-raised to 1M over Dominykas’ bet to 350K – and found a call. The river was the

, and Jean-Serge went all in for his remaining stack… only to be snap-called.

for a flopped straight!

Tournament players in Quebec all know that Marc-Olivier Carpentier-Perrault is an accomplished player both online and live – there’s simply no doubting his skill or his experience. He has used that to vault into first place within the first three levels played today, and since then he has been accumulating chips an an amazing rate – he’s already up over 11M, which means he has half the chips in play and then some.

He just played a hand against Jason James – himself a universally respected player. We arrived to see a flop of

. Jason laid out a flop bet of 475K which Marc-Olivier called. The turn came

and the action was a quick check-check, and then the river

At this point, Jason put out a big bet of over 1M in chips – a completely normal play with the betting lead, an opponent who has shown no particular strength in the hand, and a relatively poorly coordinated board considering the runout.

for two pair. “I’ve never been hit that hard by the deck,” he announced to the table as he collected his chips.