The MILLIONS North America got off to a flying start today with a massive turnout for Day 1A of the MILLIONS Open. This three-day event brought out an impressive field of 586 entries for its first starting flight that included 112 re-entries. The tournament staff showed their professionalism by filling open seats as quickly as possible to make sure that all of the 130 alternates made their way into the field with as little delay as possible. 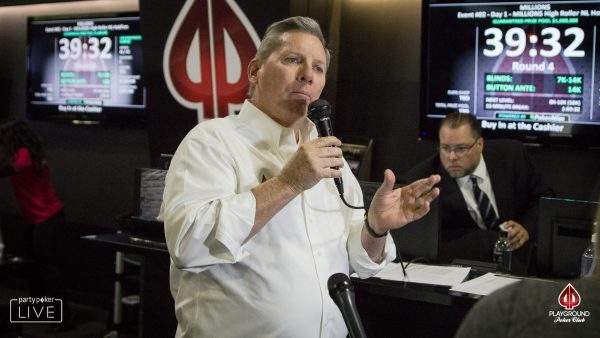 One of the highlights of the afternoon was certainly when Mike Sexton took a moment to address the crowd. Everyone was happy to hear from one of the most recognizable men in poker today, as he congratulated both the Playground staff and partypoker LIVE team on winning the GPI American Poker Awards event of the year for last year’s edition of the MILLIONS. Mike is one of the players who bagged at the end of the day, so we’re sure to see him on Day 2 of the Open.

Late registration is available for the first nine levels of play on each Day 1 for this event, and the players came out firing. The action was fast and aggressive for most of the afternoon until things cooled off during the last two levels of the day. At that stage, only the short stacks seemed willing to stay aggressive, as most of the big stacks were happy to sit tight and wait to bag chips.

By the time the dust settled at the end of level 12, 197 players bagged chips, averaging just over 2,900,000 chips each. Thanks to the huge number of chips in play, many big stacks emerged from Day 1A, but a handful of players are comfortably ahead of the pack with more than double the chip average waiting in the bag.

Day 1B starts tomorrow at noon, and it promises to be another huge field.

The field has shrunk down to 224 runners, but the tournament hall is still packed to capacity here in Day 1A of the MILLIONS Open. The tables are being turned over with blinding speed; each closing tournament table means room to fit another cash table to help meet today’s exceptional demand.

The massive amount of chips in play means that the players, thanks to their deep stacks, still have lots of room to maneuver so the play has taken on a more cautious tone over the last few levels; it seems that only the short stacks are willing to put their tournament lives at risk at this late stage in the day. Many in the field are already looking past the final level to getting their chips in the bag for Day 2, but, as any player knows, things can change quickly and anything can happen at any moment.

Here are some photos from the late stages of Day 1A:

The late registration period has come to a close on Day 1A of the MILLIONS Open, with 587 entries, including 112 re-entries, in the first flight of this opening event. The excellent turnout put 587,000,000 chips in play today so there will be some huge stacks moving on to Monday’s Day 2.

Day 1B of the MILLIONS Open kicks off tomorrow at noon, and, judging by the popularity of this flight, it should draw another huge crowd.

Today’s field is already down by more than half, leaving 274 players in contention as they head down the home stretch.

The Open continues in level 9 and players have kept entering and re-rentering the whole way along today – adding up to a massive 569 entries so far. Late registration ends at the end of the break following this level.

Here are a few more photos in the tournament.

The players in Day 1A of the MILLIONS Open have taken their second break of the day, and during the break we managed to find the current leaders in this massive starting day field. As of the break, there were still 370 players, meaning that play continued on at least 42 tables! For the half-way point in today’s starting flight, that’s a pretty huge number!

The chip leader at the time was Jeffrey Blenkarn who has amassed well over 4M in chips – but as we wrote above, the day is only half we though – so only time will tell if Blenkarn, or any of the other leaders, will use – or squander – their lead.

As the blinds are increasing, players with smaller stacks are starting to feel pressured and we’re starting to notice a few pre-flop all-ins. We are a few minutes from the second break, and blinds are now at 10K-20K with a 20K ante. There are 370 players left from a total of 516 entries so far.

We got lucky enough to witness one of those pre-flop all-in hands on table 50. An unknown player pushed his entire stack in with

and Vincent Tremblay made the call, after a few minutes of hesitation, with

which gave Vincent a top pair and the

on the river finished the story – at least for this hand…