Kevin Macphee was sitting in the big blind when Matthew Volosevich moved all-in from late position. With only around 10 big blinds to his name, Kevin peeled a solid pocket pair and committed his stack heads-up.

Kevin was poised for a double up, until the river card of a

board delivered the winning hand to his opponent. He was eliminated in 101st place, two spots before the first pay jump.

Players in the Main Event have just enjoyed a dinner break. A warm buffet has been laid out for our Day 3 players to recharge. Six levels have passed, and four more are to be played before our Day 4 qualifiers are decided.

Brian Hastings is in the driver’s seat, with almost 50M chips. That’s 1/40th of the nearly 2 billion chips in  play, with 100 players left!

The feature table will now show Marc-André Ladouceur, Darryll Fish and Manig Loeser, among others.

The MILLIONS North America Main Event players are now on a 30-minute dinner break, and play will resume at 7:25pm for 4 more levels.

Antonio Esfandiari, who was on the feature table for a while, was sent back in the jungle. He was seen playing a lot of pots and taking advantage of his stack, and perhaps his notoriety. In this hand however, he was stood up against by Matthew Volosevich.

The turn was checked by both, and Antonio bet out 1,575,000 on the river. Most people thought Antonio was just going to pick up another pot after getting a couple of answers to his questions, but Matthew found some chips and decided to raise with them. 5,200,000 to go. Antonio stayed in the tank briefly, and cut his losses.

Level 22 has begun, and this marks the half-way mark of the day, with 5 levels completed and 5 to go. A 30-minute dinner break will take place following this level, at which point we will bring an update on the leaderboard.

Starting this afternoon, the rest of the Main Event will be presented as a cards-up live stream (with a 30 minute security delay). The first stint presented today featured the table with Antonio Esfandiari, who is one of the chip leaders in the tournament. That table has now re-taken its spot in the main part of the Tournament Hall and a new table will be the feature table, this time Table 63, featuring the following players:

You can view the Live Stream in an interactive format at My partypoker Live, or just click on the Live tab in the menu right here on the MILLIONS Event blog. 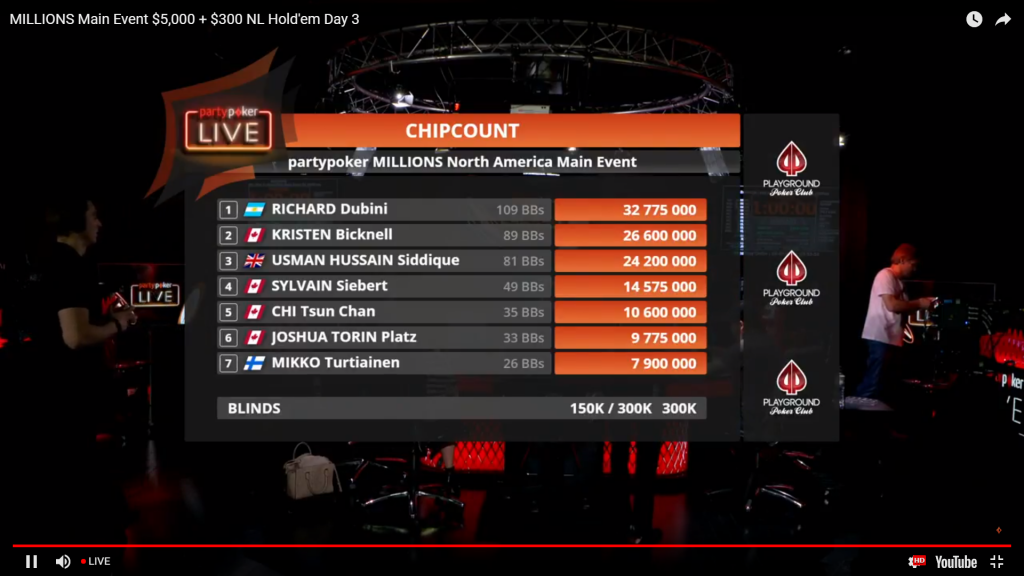