The end-game in Event #1 of the May Power Weekend at Playground Poker Club ran very quickly, as the table was reduced from 8 to 2 in just over an hour, and to 1 Champion left standing just minutes after that. And when the last stacks were shipped, Stuart Taylor emerged as the victor. There was no deal between the players as heads up play got underway, and no deal would be made as this segment of the tournament only lasted for around 25 minutes.

Michael Hunter started out roughly equal to Stuart as play began, but in short order, Stuart had taken about 40% of Michael’s chips, and when he looked at an

he felt it was time to make his shove. Stuart took no time at all to call and flip over his cards:

The flop was a pretty definitive answer to the question at hand:

was enough, leaving the meaningless 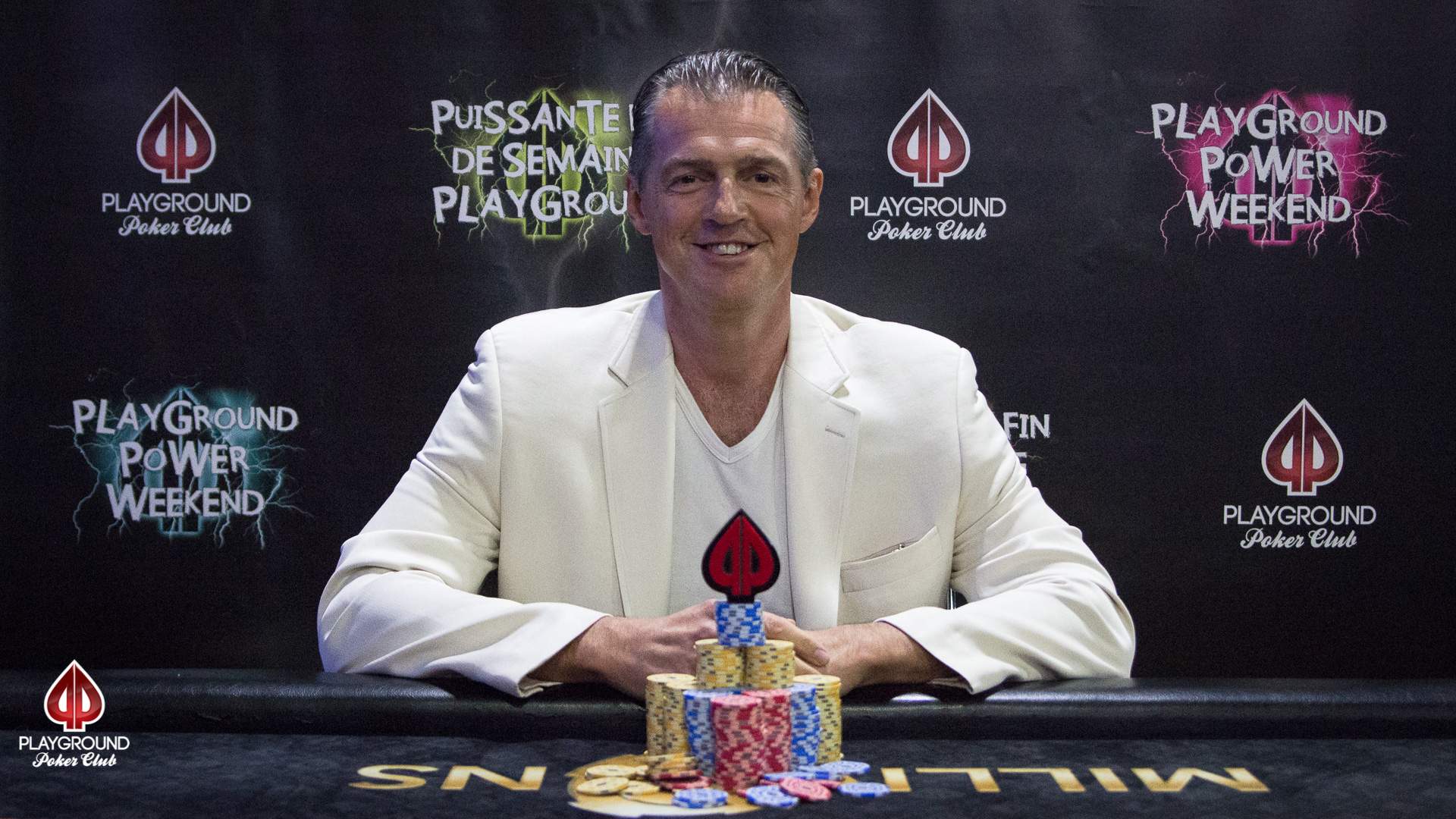 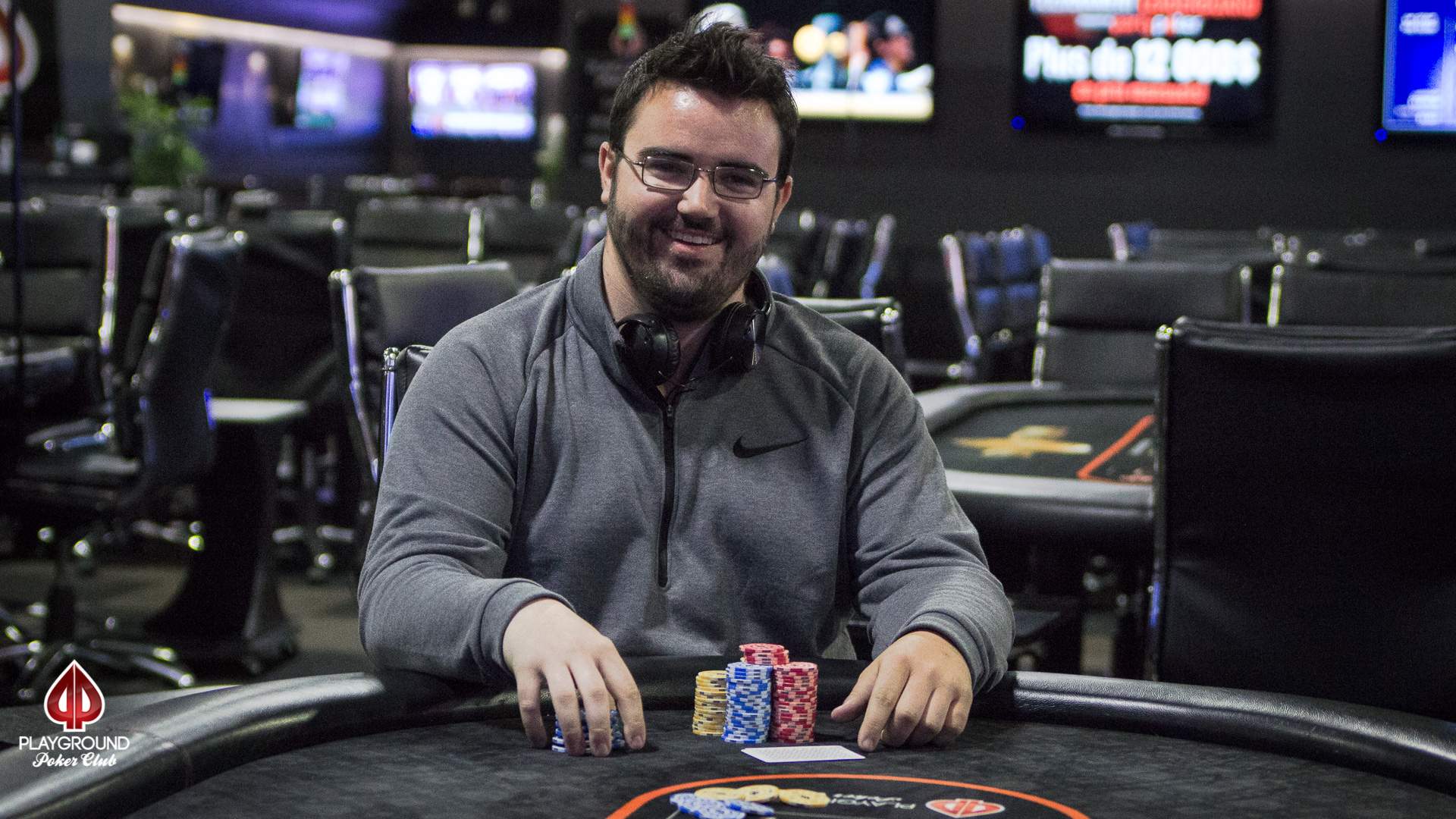 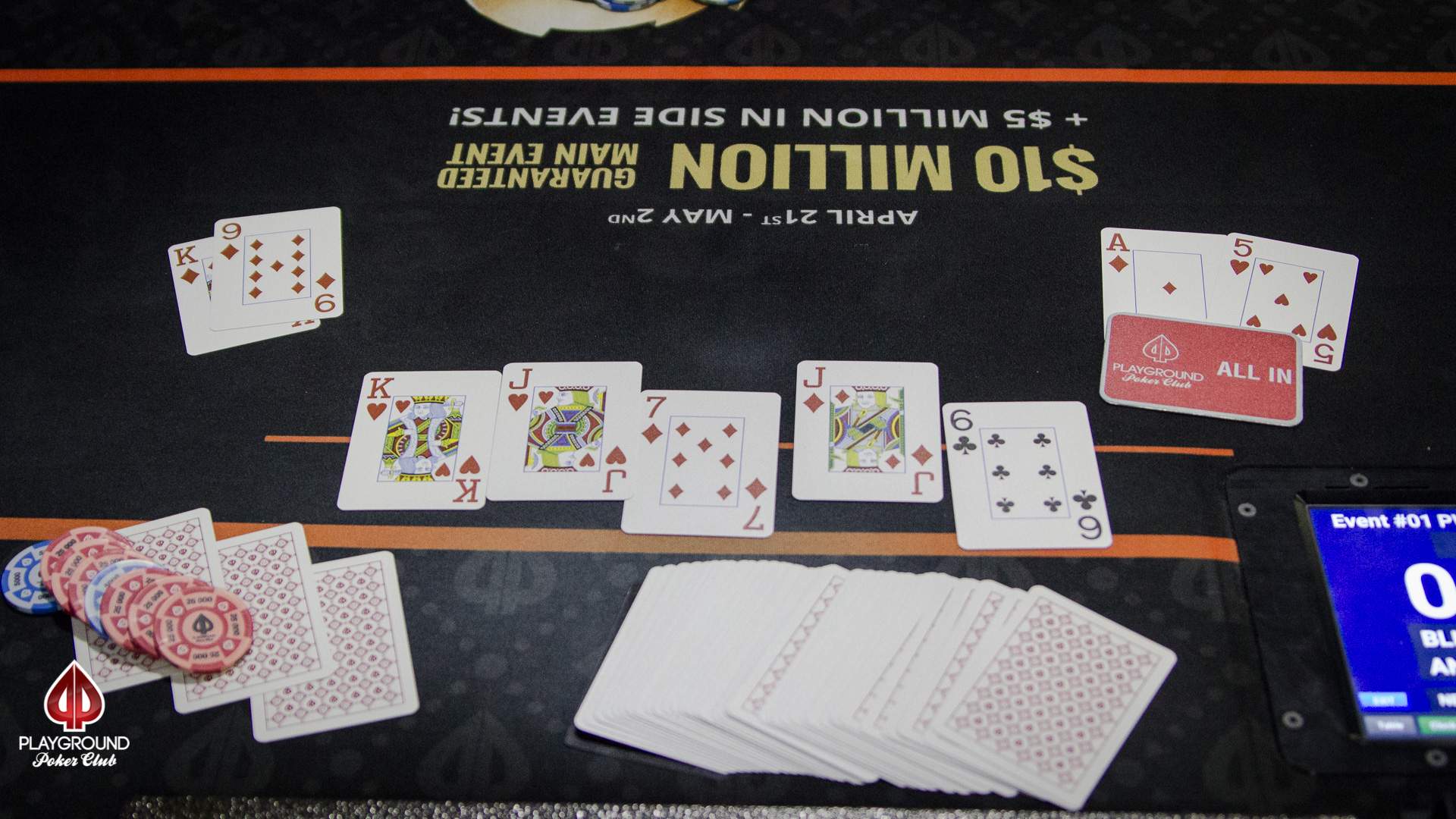 Play in Event #1 is now heads up after the dramatic purge from 4 to 2 engineered by Stuart Taylor. Stuart and Michael Hunter are reasonably close in terms of chip count, though Stuart has a slight advantage after adding Rong and Jonathan’s stacks to his own.

Here are a couple of photos of the two players, who have re-arranged themselves at the table for the heads up portion of the event.

Mario Page exited in 5th after some difficulty following the last break of the day, going down to 9K, then up to around 20K but never in any state of ICM health. He finally went out, cashing for $410, which lead to the hand of the tournament just a few hands later.

With 4 players remaining, Rong Xu open-shoved his 162,000 chip stack from the button. He found a very quick call from Jonathan Lefebvre in Seat 2 (sb) and then action turned to Stuart Taylor, the chip leader who had already contributed a big blind to the pot. He asked for a count of Jonathan’s stack as well, explaining that he wasn’t just stalling, and found out that Jonathan was playing 132,000.

Stuart thought deeply but not for too long, eventually making the call. All hole cards were exposed:

And Michael Hunter – with a very healthy stack – could only sit and watch!

The flop was dealt and it hinted at a clear win for Stuart:

– not only had he flopped top pair, he also had a redraw to the effective nuts. The turn burnished his hand a little more:

for two pair, and the river

sealed the deal – Stuart had eliminated both players! Rong could only make the rueful point that had Stuart just allowed the two shorter stacks to fight it out, he would have won the hand against Jonathan and doubled up… and from there, anything could have happened. Alas it was not to be – Stuart won the hand and took a massive lead in the tournament.

Anderson Frank-Graham is one of the more charismatic players at the tournament table, but he also has more than a modicum of talent and is often found on final tables. He was unhappy with is performance today, exclaiming as he left that it had been his, “worst final table performance ever…” – but finding no sympathy from his fellow players!

Chips were flying around the table for the following 2 orbits, with all-ins and calls every second or third hand but no eliminations. Mario Page was down to 9K but doubled on his next hand so was marginal but safe for a little bit, and Rong Xu picked up a load of chips from both of the players on his left.

Eventually Jean Lafortune was also eliminated as his

was outdrawn by the

held by Michael Hunter. Jean pushed on the

flop, but Michael hit his flush after the dealer laid out a

on the turn and the killer

That was enough laddering up for Steven Harscovitch, who had nurtured a small stack for much of the afternoon. He finally pushed holding a respectable

and found a call from Stuart Taylor, who was playing the

– which held up as the board ran out 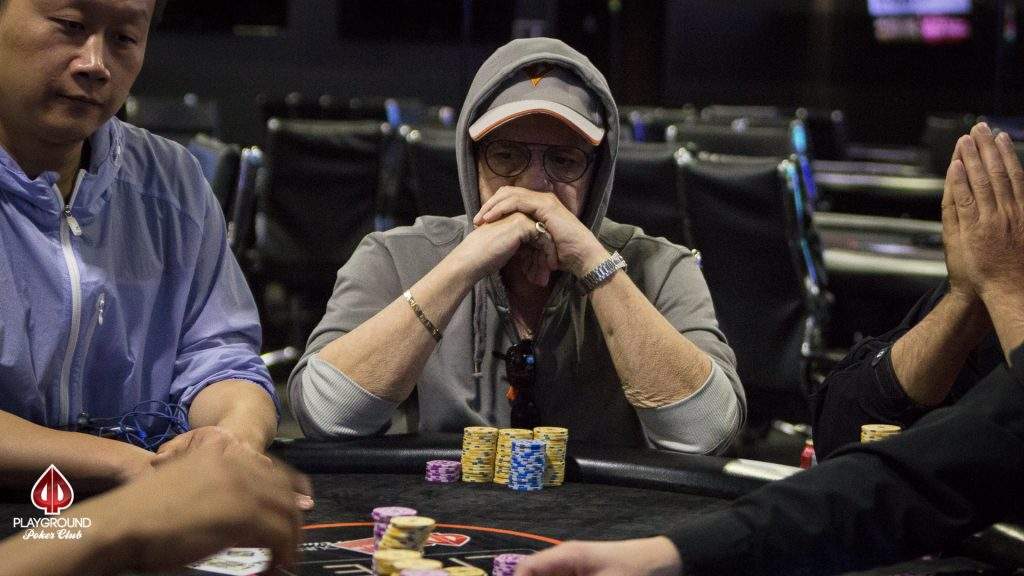 Event #1 has continued to move right along and not only has it hit the final table, but the bubble has just burst as François Falardeau – one of the chip leaders for much of the afternoon – has been eliminated. The players have just taken their scheduled break and we were able to get full counts for the remaining players while the action was paused. The current leader is Stuart Taylor – which isn’t good news for anyone remaining – he’s an experienced tournament player.

There are just 2 8-handed tables left in the tournament – 16 players total – and the pace of play has been rapid all day long. With just 8 places paying and everyone in the tournament in easy eye-sight of one another, there’s a strong chance that pace slows down at least a little bit.

Some photos from level 13