Event #8, the $60 + $10 NL Hold’em Single Rebuy, brought a field of 70 runners, enough to easily surpass the $3,000 guarantee for this event. The action was predictably aggressive for this type of tournament, but only 13 players took advantage of the re-buy option.

Play at the final table was particularly snug, but things opened up once the blinds reached 8K/16K. Following a flurry of eliminations that quickly reduced the field to three players, Victor Soumis, Brigitte Metivier and Normand Plessis Belair, who agreed to an ICM chop of the prize pool. Although Soumis had controlled the biggest stack for a large part of the final table, by the time negotiations had started Plessis had taken over the chip lead and got the lion’s share of the prize pool according to the ICM chop.

Not long after the chop was concluded, Soumis hit the rail as a victim of unfortunate timing. Soumis moved all-in from his button during three-handed play, and Metivier, who had warned him that she would defend her blind without looking at her cards, woke up with aces and made the snap call. Soumis’

came up short even though he managed to make two pair, as the low card on the board paired, counterfeiting his hand and giving Metivier the win with aces-up.

The heads-up battle between Plessis Belair and Metivier began with the two playing nearly the same amount of chips, but Plessis Belair ran hot and soon found himself with a 3:1 chip lead. From there, Metivier started turning up the pressure with a series of pre-flop all-ins, forcing Plessis Belair to fold each time. But before long Plessis Belair woke up with big slick and was waiting for Metivier to move all-in, making the snap call when she did. Metivier found her hand,

, dominated and got no help from the board, giving the win to Plessis Belair. He collected an additional $300 for the victory, on the top of the $1,066 from the ICM chop. Congratulations! 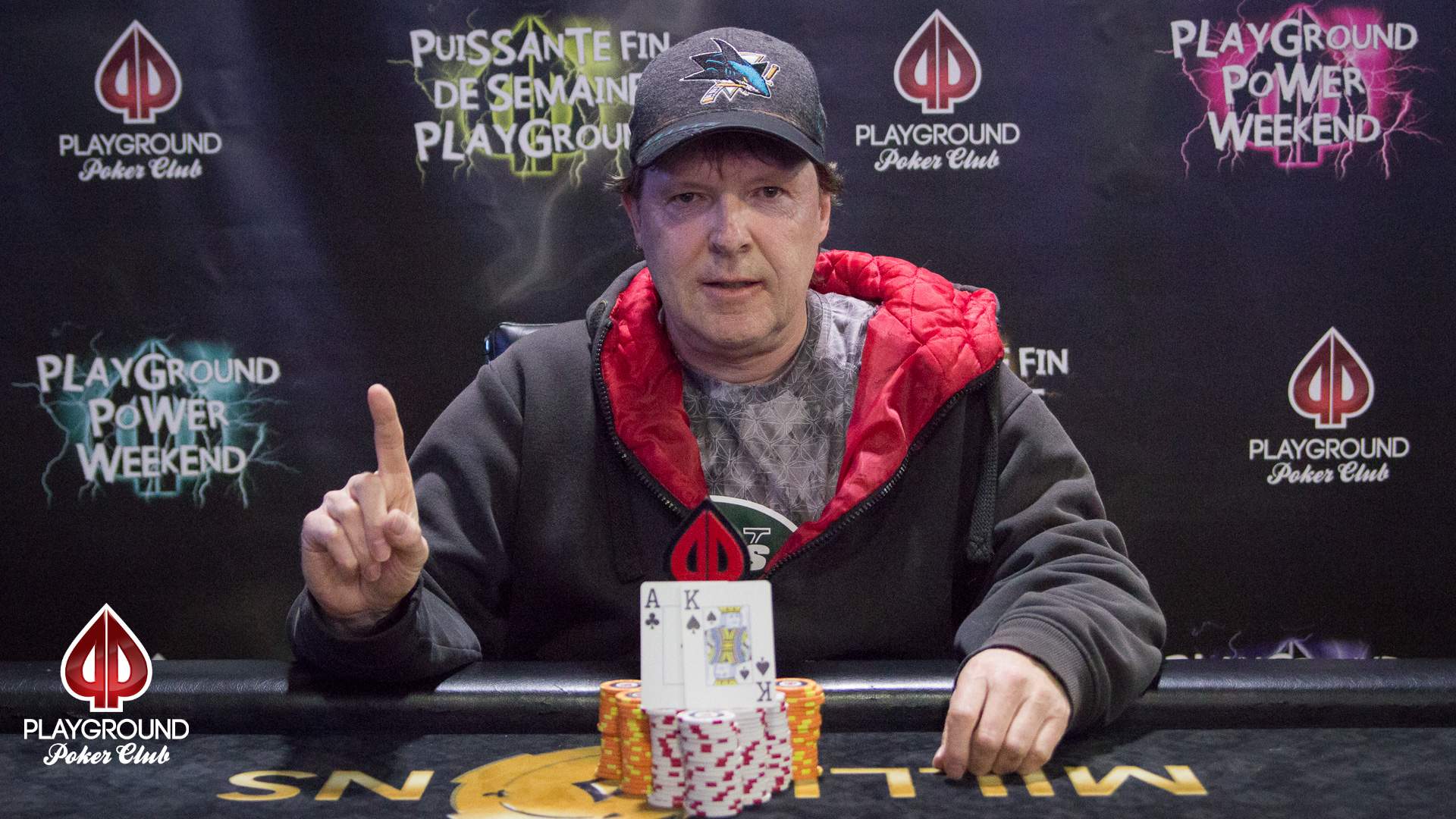 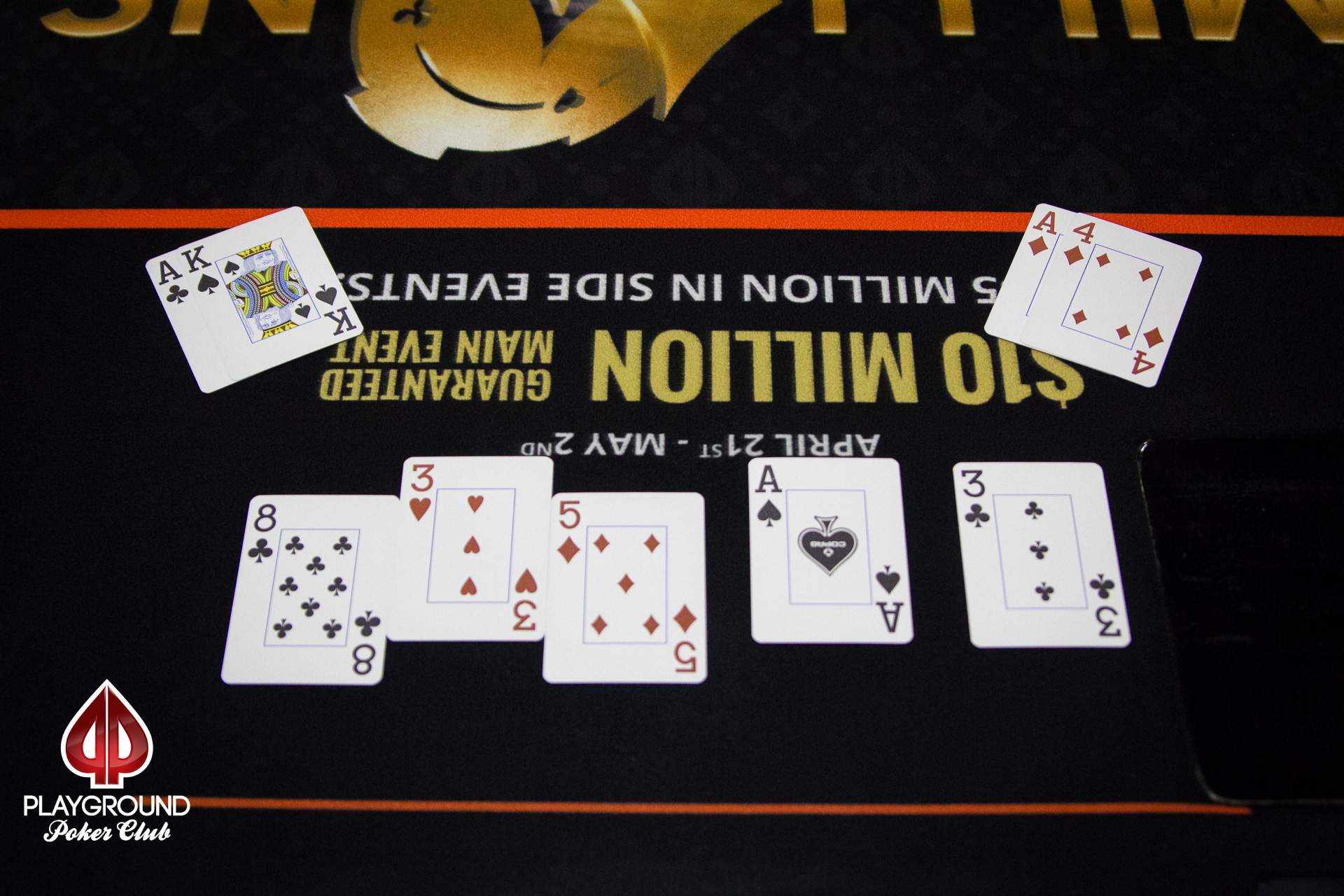 The three remaining players in the Single Rebuy have agreed to an ICM chop of the remaining prize pool.

The prize pool was divided according to their current stacks; Brigitte Metivier will take $805, Victor Soumis will collect $930, Normand Plessis Belair will pocker $1066 for the biggest stack in play, and $300 remains for the eventual winner.

With the blinds at 8K/16K, Eric Martin was down to roughly 10 big blinds when he decided to make his move. As the first to act, he moved all-in before the flop, forcing Victor Soumis and Normand Plessis Belair to fold, but Brigitte Metivier, in the big blind, made the call and put her tournament life at risk. Hands were tabled to show that both players had legitimate hands for the situation; Martin held

Metivier took down the pot thanks to her aces-up, and Martin was reduced to less than three big blinds. Martin’s run came to an end not long after when he woke up with pocket fours in the small blind, only to run into Soumis’ pocket queens in the big blind. The runout did not provide Martin’s two-outer, and he hit the rail in fourth place. He will collect $420 for the deep run.

There are just 5 players left, and we were able to get counts of their respective stack sizes during the past few uneventful hands. Victor is clearly the leader going away, and it will be interesting to see how well he can use his stack to dictate play going forward.

Play at the final table has been quite open and the game has progressed rapidly.

First to go out was Michael Monteleone, who cashed for $150 with the new payout structure agreed to by all the players. Just 2 hands later it was Pascal Brisson’s turn to hit the rail, followed by Ronald Thibault.

A few more hands were then dealt until the hand of the final table. Players were getting ready to go for their final break of the day when a hand was dealt with Jean Pascal Gauthier on the button. Rong Xu opened the action with a shove that, although it was in no way “hidden” or subtle, Jean Pascal didn’t notice – he went all-in from the button in an attempt to steal. In any case, the small blind (Victor Soumis) had a hand, and as soon as he confirmed the counts (he covered both players), he called and it was a 3-way pot.

Victor was well in the lead and the flop:

changed nothing. There were no miracles on the turn

either, and Victor stacked up both players’ chips!

They’re down to a single table of 10 players in Event #8, and with only 9 players scheduled to be in the money, it was an easy thing to make a deal to adjust the payouts so all 10 players will get paid. $110 will be removed from the 1st place prize and $40 from the 2nd place prize, making a 10th place payout of $150. 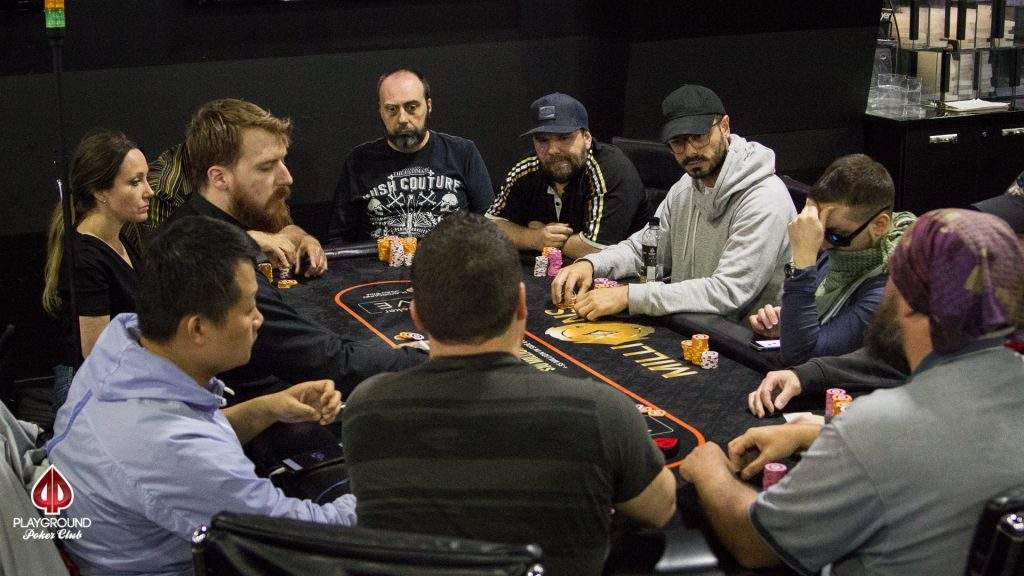