Event #3 of the May Power Weekend, the PLO Bounty Re-entry, brought out enough players to easily surpass this tournament’s $10,000 guarantee.

In predictable fashion, the players were quick to put their bounty chips in play throughout the early levels, each prepared to take advantage of this event’s unlimited re-entry format if necessary. This type of play comes with the territory for any re-entry bounty tournament, but the surprise was that the players showed no signs of slowing down after the end of the late registration and re-entry period. The field reduced to the final nine, who moved on to the final table, well before anyone expected.

The last two men sitting, Marc Chanthamynavong and Jonathan Bussieres, were playing similarly-sized stacks and agreed to a deal that would see them each take $2,400, leaving an extra $406 for the eventual winner. Both players fond a way to survive the crazy action in the early levels and built their respective stacks slowly and steadily throughout the evening.

The two players traded a few small pots back and forth during their heads-up match before Bussieres doubled through Chanthamynavong. Bussieres had flopped bottom set and played it passively against Chanthamynavong’s aggression. Chanthamynavong had flopped a combo draw, with lots of straight and flush outs, and when Bussieres raised all-in on the turn, Chanthamynavong was committed to the pot. Bussieres’ set stood, giving him a big double up and a healthy chip lead. On the following hand, all the chips went in pre-flop, and once again Bussieres flopped a lead that he would not relinquish.

With the victory, Bussieres adds another line to his steadily growing poker resume and collects another Playground event championship. Congratulations! 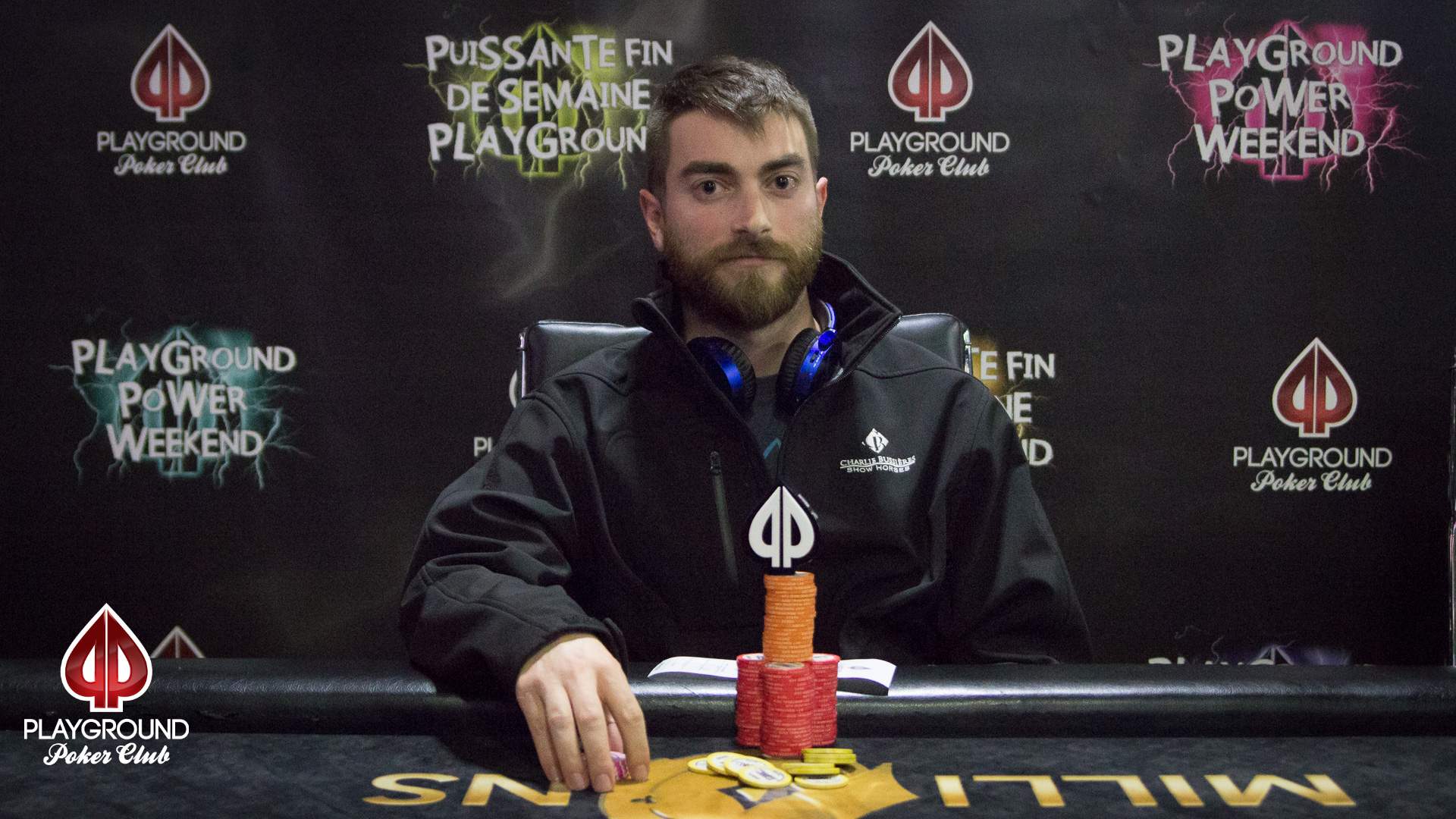 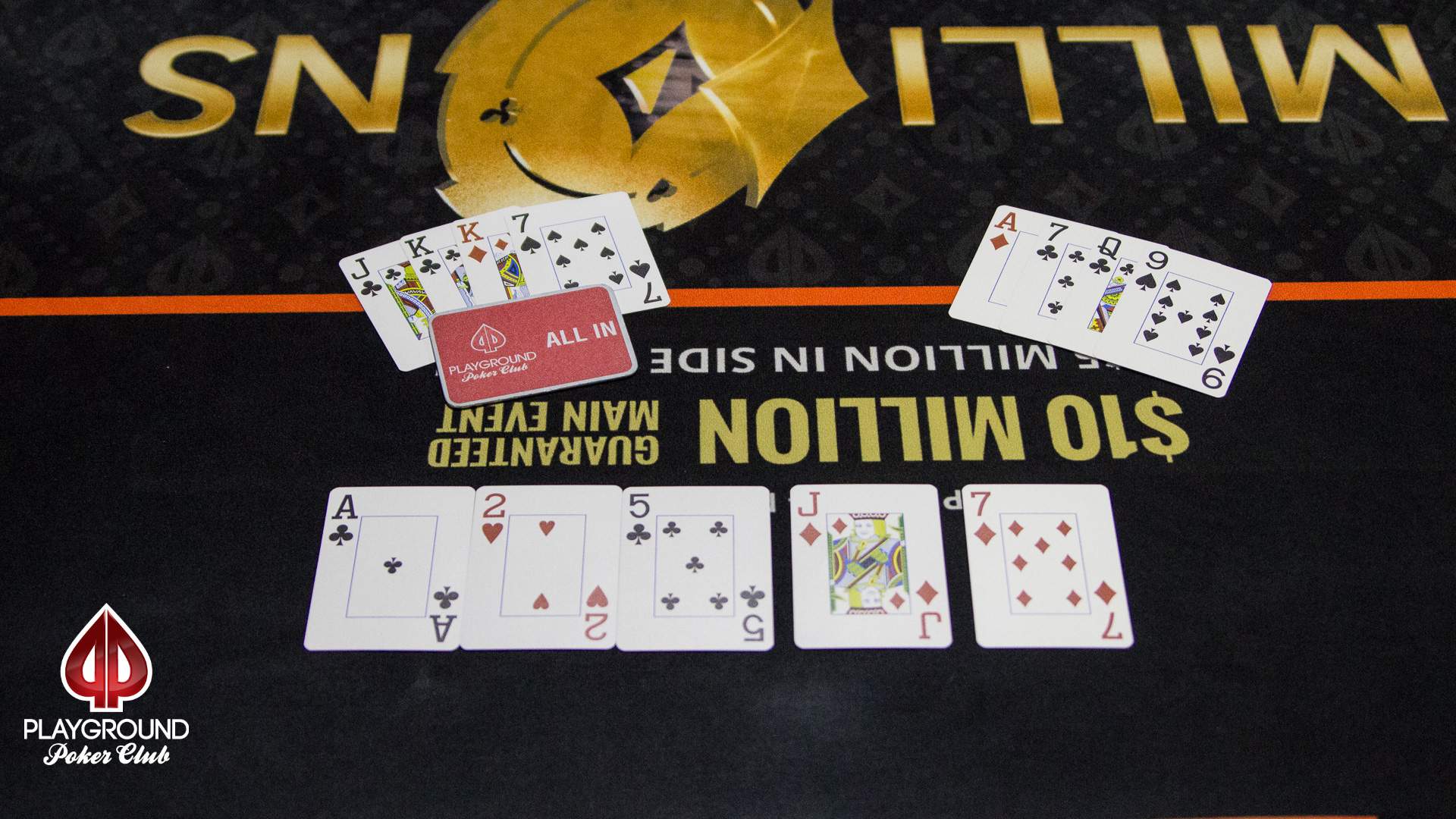 The Birdman’s flight has ended in the Omaha Bounty, as Marc Chanthamynavong eliminated Joey Bozcek in third place. Chanthamynavong had taken most of Bozcek’s chips earlier when Chanthamynavong flopped trips in a heads-up pot, Boczek had tried to steal the pot but ultimately doubled up his opponent when his all-in on the flop was quickly called.

On Boczek’s final hand, Chanthamynavong once again flopped a strong hand, bottom set, and Boczek was committed to calling off his stack when his lead bet was raised all-in by Chanthamynavong. The runout was safe for the set, and Chanthamynavong put another bounty in his pocket. Boczek will collect $1,390 for his third place finish.

In a heads-up pot between Bussieres and Baril, all the chips went in on a

, gave Bussieres a flush and yet another bounty.

Joey Boczek has just added another bounty to his collection, as he eliminated Shijaudin Daud Sha in fifth place.

The two played a heads-up pot where Daud Sha limped and called following Boczek’s pre-flop raise to 26K. Boczek couldn’t have asked for a better spot when playing

and flopped the nut straight on a

turn. With the nuts and a flush re-draw, Boczek happily called, and Daud Sha’s two-pair hand came up short when the

The last five players in the Omaha Bounty have just returned to their seats following the third break of the evening. The stacks have shifted at the final table, and Marc Chanthamynavong now holds the chip lead.

Joey “Birdman” Boczek had his wings clipped by Shijaudin Daud Sha, when Daud Sha found a way to river a straight against Boczek’s flopped top set for a huge double up. Chanthamynavong has slowly and steadily crept up the leader board, helped by eliminating Yannick Guerin in sixth place, to now hold a narrow lead over the field. But it is still anyone’s game at this stage, as the blinds creep up and the player’s options become more and more limited.

There have only been a few hands played the final table in the Omaha Bounty, but two players have already made their exits. In keeping with the theme of this evening, the players have been quick to put their bounty chips in play, drawing calls almost as quickly in most cases.

Manfred Gunther was eliminated in ninth place in the first orbit at the final table. Jonathan Bussieres had opened the action to 5,300 on Gunther’s 2,400 big blind and drew calls from two players before the action go to Gunther, who raised the stakes to 28,000. Bussieres re-raised all-in, chasing the other two out of the pot before Gunther called off his stack.

Bussieres’ aces were good enough to send Gunther to the rail in ninth place.

Ivan Driard followed suit shortly thereafter, when he was all-in before the flop for less than five big blinds and got called by two players. Although the hand was checked down, both opponents made two-pair hands, and Driard was eliminated in eighth place.