Tonight’s event was a 50/50 Bounty that attracted a staggering 245 players. 31 of them got paid, but many more went home with their money back or a small profit from the collected $100 bounty chips.

The money was reached without any hand-for-hand play after 2 players busted simultaneously, and from there the eliminations came in at a fast pace, until the tournament moved to a 2-table affair. After so many fast busts, it was natural to see the progression slow down, and this moderation was supported by the fact that players where trying to play low-risk poker to earn a seat in the finals.

The last table was eventually reached, and provided a good amount of drama. Frédéric Normand mistook a bounty chip for a regular chip, and threw it in as a call. The bounty chip, however, is always an all-in bet and that mistake cost him the second largest stack in play.

Alex Plourde collected the chips apologetically. Shortly after, he beat Michael Frenkel with a twin hand that had one difference: it was suited! The backdoor flush completed.

Plourde started the night strong and never looked back. He appeared on many leaderboards, showed up on the final table as the chip leader and remained in that spot until Martin Dufour came along.

Dufour was the smooth operator of the night. He remained undetected for the longest time, always lurking just below the leaders’ pack and always focused. He had the chance to knock out players in 4th and 3rd position, which allowed him to face Plourde with some munitions. After a double-up and a few more pots, they opted to reduce the money difference. $500 were left up top and they chopped the rest of the money.

Dufour, however, seemed to have the upper hand, and kept his momentum going. Plourde’s stack was crumbling, and he had a little over a million when the last hand went down. It was a pre-flop all-in showdown, and when the last card was revealed, Dufour was crowned champion.

Congratulations to both players! 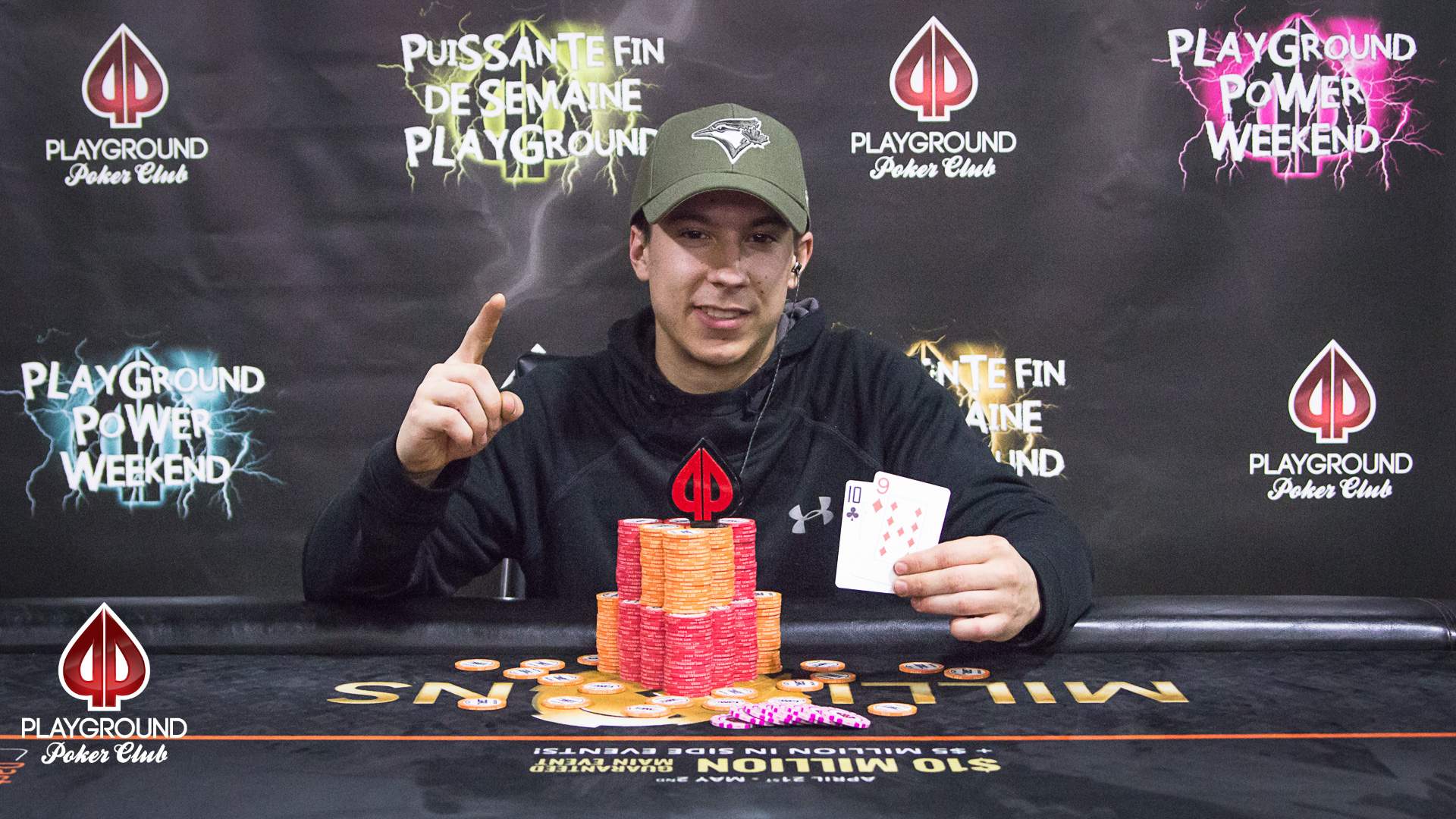 Our two finalists got it in pre-flop and had an interesting run out:

After this hand, Martin had about 1.7M out of the 4.9M in play. He went on to play solid poker for a while and got to almost even. That’s when they decided to chop what they could. They are now playing for $500 with $4,280 each in the bank.

Recent events: Plourde limped in and was facing both blinds on the flop. He and Michael Frenkel got it in on the flop, and the run out was out of this world.

Alex knocks another one down! After that, it was Martin Dufour who came forward. He knocked out Pierre-Luc Siméon and Marcello Iacovella in back-to-back hands to earn a fighting chance in a heads-up against Plourde. Dufour is a 3.5 to 1 underdog, but he has good momentum.

Alex Plourde profited in a very significant way off a terrible mistake by Frédéric Normand.

On the river, the pot was rather small, and Plourde bet 170K. Normand threw a chip in, but when the chip fell, he realized that it was a bounty chip. The floor was called over and made the only possible ruling: Normand was all-in. Plourde called.

Just like that, the second in chips lost to the chip leader and a monster was created. Plourde went on to bust Rabih Aboudib with

. He now has stranglehold on the tournament, with about 60% of the chips in play.

From 245 players, just 7 are remaining. They just took a short break during which the tournament director put their counts in the ICM calculator. When the break was over, the numbers were ready but not to everybody’s liking and play resumed with untouched prizes.

Eleven players asked to see some ICM numbers, but Patrick St-Onge who was the shortest stack at the time refused the deal right away. He went on to double his chips with

. He shoved from the small blind and beat Alex Plourde’s

when his flopped 2-pair became a boat.

Daniel Mackay, however, was not so lucky. He lost to Martin Dufour who found quads on the board, holding

! Daniel was out in 10th and John Yang Huynh busted just before he had the chance to move to the final table. He got the last of the $450 prizes.

On the first hand of the final, a set-up was dealt:

Kuoch got a slip worth $530. Patrick St-Onge followed when his small blind shove was taken care of by Alex Plourde. He cashes $670. Well done!