The stage is set for Event #1, the Colossus, to crown its champion this afternoon.

The starting field of 3,503 runners has been narrowed down to 37 players. Everyone remaining is guaranteed a respectable cash from this event-at least $3,000-but they all have their eyes set on the $155,000 first-place prize. And they will play as many 40-minute levels as needed to see who gets that six-figure score. There will be seating re-draws when 16 and 9 players remain.

As the day begins, Trevor DeLaney has a huge lead over the field with 7,705,000 in chips. His next closest rival, Jackob Datashvili, will be returning to a stack of 4,235,000. Today’s blinds will start at 40,000/80,000 so the larger stacks in the field have nothing to worry about, but this starting point puts a dozen players in the red zone with less than 15 big blinds. With few options left, expect to see the short stacks moving all in early and often this afternoon.

The anticipation has been building, and the wait will be over soon as Event #2, the $1,000 + $100 Main Event of the WSOP-C Playground, kicks off today at noon. It will be the first of four live starting flights and each of these flights permits a single re-entry until the end of play on Day 1. Players will start with 50,000 in chips and play through ten 60-minute levels, as they start their journeys through this 4-day event.

If the Day 1s don’t pan out then everyone still has a shot at this one because players can also buy-in and re-enter until the beginning of level 13 on Day 2. Given the number of opportunities to enter and re-enter this event, expect to see some wild action in the early levels of each Day 1. The players are sure to come out with guns blazing, as they know that they can fire multiple bullets at the $2,000,000 guaranteed prize pool.

The tournament hall will be filled to capacity as the WSOP-C Playground shifts into high gear, with three tournaments running this afternoon. Event #1, the Colossus, continues as play enters Day 3 where only 37 of the original 3,503 entries remain. Also, Day 2 of Event #3, the Monster Stack, is set to get underway at 1pm when 154 players will return to play down until there is a winner.

It’s going to be an action-packed day. Good luck to all!

Good luck to everyone continuing in Day 2!

We’ve often remarked that along with the major poker events comes a rush of Bad Beat Jackpots – and while one BBJ isn’t exactly a “rush” – it’s a pretty good start! The Omaha BBJ was hit recently, so the jackpot amount was not tremendously large – $7,846 – but a jackpot is a jackpot! The action happened on Table 14, which was a full $5/$5 PLO table. The table was made up of a nice mix of local players and players visiting for the WSOP-C Playground.

The button was on Seat 3 (Rajendra P) and there was a straddle to $10 from seat 6. Preflop action folded to Sammy P in seat 1 who chose to call. Action then folded to the button, who raised to $50 and found a call from the player in the sb (Elio S) and Sammy called. There were three players to the flop.

Action was on Elio, who checked, followed by Sammy. Rajendra – who made the initial raise – then bet pot ($165) and got a fold from Elio but a call from Sammy.

Sammy checked once again and then facing a $10 bet from Rajendra, he raised to $100 and got a call.

On this river card, Sammy opened with a bet of $400, which covered Rajendra, who in any case instantly called. It was time for a showdown.

For losing the hand and winning the Jackpot, Sammy P has won $2,982, while Rajendra has won $1,491. The same amount will be shared among the other 6 players at the table, and the final share will be divided amongst the players at the other active PLO games at the time.

Massage therapy and the game of poker go together very well – there’s nothing better than to have a professional massage therapist work out the kinks that can develop from long stretches at the table. Massage isn’t just useful for working out a kink in your neck, though – it can improve circulation, help with joint mobility, and keep an aching player alert through a long poker session. At just $1/minute, it’s also an amazing bargain!

These 3 players on table 20 clearly understand the benefits of massage therapy to their poker game! 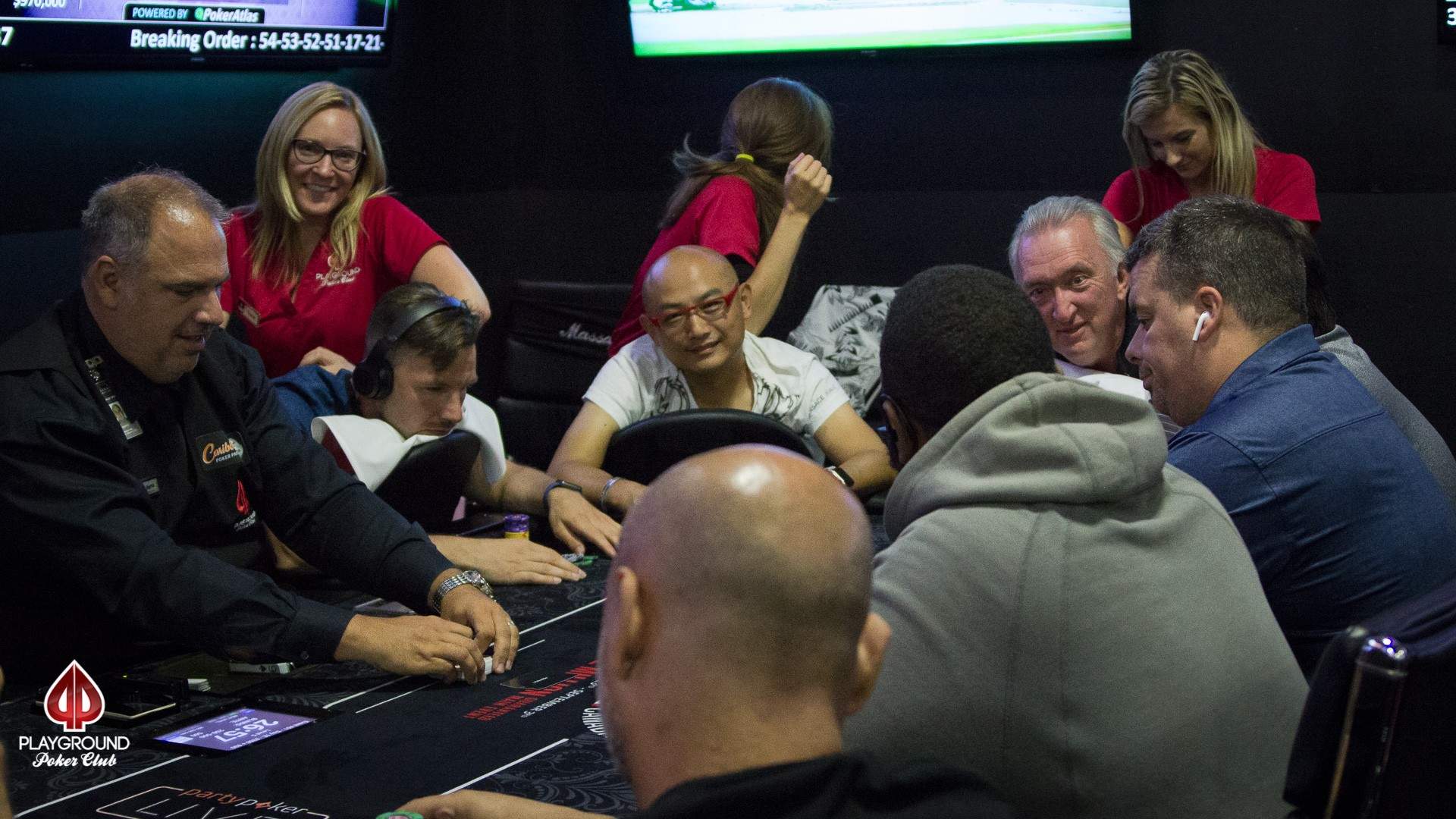 It has become customary, when we host huge events like the WSOP-C Playground, to build an additional facility to ensure that we can accommodate all of the players that come to the Club from throughout North America and around the world. For this series, we’ve added a service to the amenities in the tent that is proving to be very popular – a hot and cold buffet that will be in service every day the tent is in use.

The buffet is located in the tent, but while it’s open, any player may buy a ticket for $15 per session which gives you unlimited access for the duration. A “session” is equivalent to the duration of a particular tournament day, so for example if you were to play Day 1F this afternoon and buy a ticket, your bracelet will be valid until the end of Day 1F – even if you aren’t in it all the way to the end.

Buffet customers with a valid bracelet may also order tableside service from the wait staff on hand, and if a player prefers to order “à la carte” (at regular prices) from The Rail, that’s OK too.

Every day there will be a printed buffet menu available, but generally speaking it includes a salad station, a section with a variety of hot mains and sides, plus two stations that should be exceptionally popular – the BYO Poutine station and the Carvery. There’s also a sweets station with muffins and other desserts as well as some smaller cold items to nosh on while you play.

Bracelets are available in the tent for just $15 per player per session. Enjoy!