The Playground 200, over several Power Weekends, has become an established event. The format is a great blend of classical structure and a modern take on tournament poker, one that brings online and live poker together.

There were four Day 1s, including one online, and 133 players came back on Sunday afternoon for Day 2. Out of that number, just 20 made it to the final day, tonight’s Day 3.

Play was fast at the beginning, and from the 3 starting tables, players were soon confined to 2 short-handed tables and playing for a spot on the Playground 200 final table and its big prizes.

Once our finalists were decided, the game was about dodging Mathieu Boucher’s attacks and earning some pay jumps. Boucher is an experienced tournament player who knows exactly what to do when given a massive lead. He took no quarter and steam rolled the table with incessant raises.

Sébastien Morrissette won an almost embarrassing amount of all-ins, against Boucher and others, to earn a spot in the last triangle. Gianfranco Giordano played solidly, knowing what Boucher was up to but lacking the chips to do something about it. The 3 of them played 3-way for quite a while. The two short stacks, one after the other, found hope of taking the lead but Boucher did not crumble, and even after giving some chips back, he kept the pressure on and busted Giordano.

The heads-up match that ensued was very short lived. Only a few hands were played, most of which were won by Boucher uncontested, until Morrissette 3bet all-in. Boucher had two scraps of paper, but made the correct mathematical call (full hand below).

Congratulations on taking down the Playground 200 of the May Power Weekend! 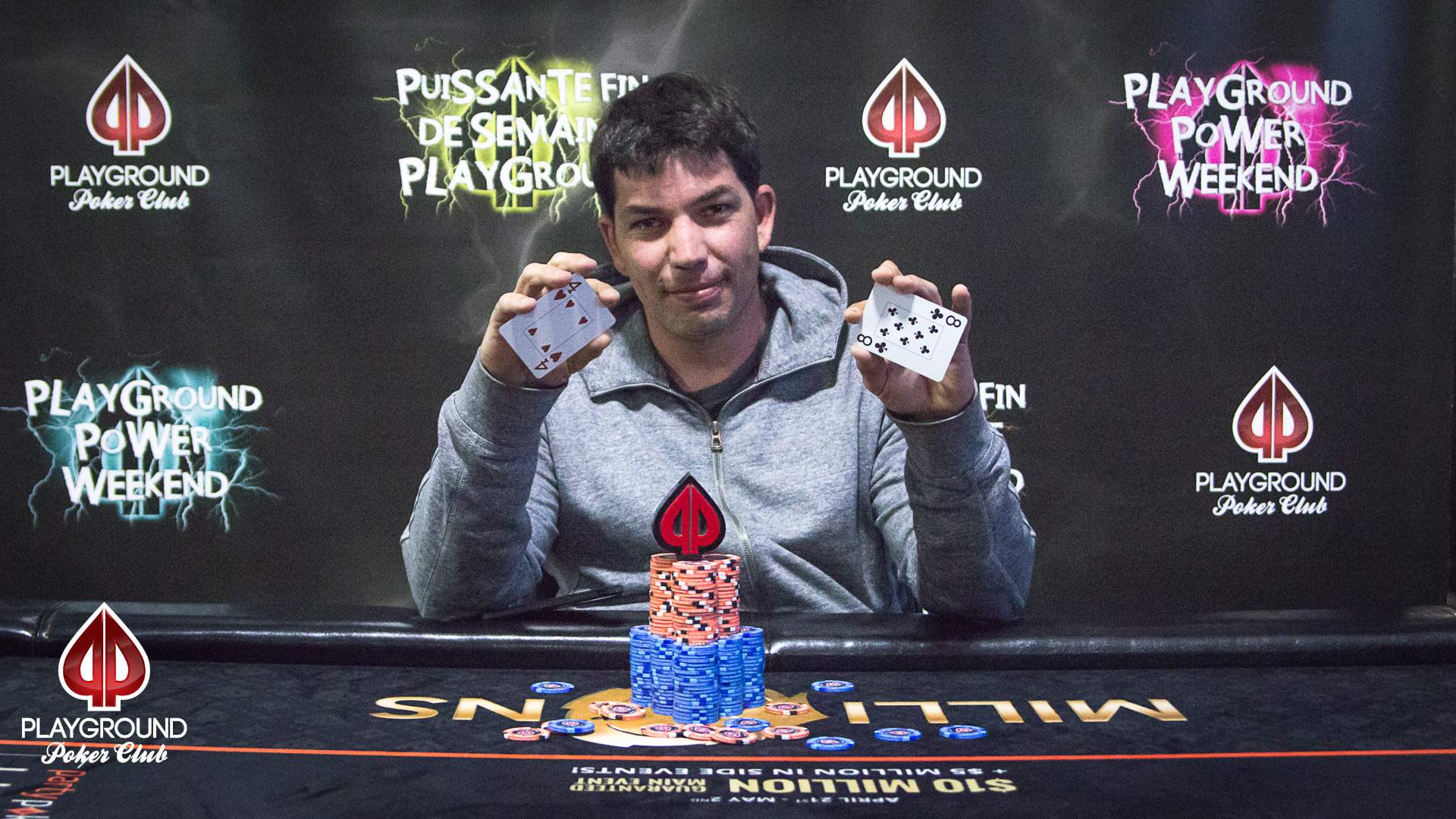 It was a very tough 3-way match, and between Boucher not letting his opponents an inch and Morissette not missing a showdown, Giordano had a lot on his plate.

When Boucher made it 500K from the small blind, Giordano shoved his remaining 2M chips and got a call.

Gianfranco Giordano got $12,400 for his 3rd place finish. Great performance!

Morissette is now facing Boucher heads-up with 3.5M to his 12.5M.

Morrissette found another double-up against Giordano after dodging a massive amount of outs.

Morissette was now slightly over Giordano in chips, but lost a lot of them to Boucher after bluffing the wrong river. Boucher had hit that card and made the call. He is back in command with 2 thirds of the chips.

Morissette took a serious hit. He check called all streets and watched the dealer push a 5M pot to Boucher who had flopped 2 pairs.

Boucher, however, gave a good portion of these chips to Giordano. Boucher led the action with a pre-flop raise to 400K, a flop bet of 400K and turn bet of 650K, but he check folded the river when facing a 1.3M bet.

Sébastien Morissette built up nicely when he hit a flush against Mathieu Boucher. Escalating bets led to a 1.5M-chip bet on the river which was called by Boucher.

Boucher must have had a chop before the heart fell on the river. He went on to double Gianfranco Giordano when he called his all-in.

After that, Morissette raised to 430K from the button and called Giordano’s 1.8M all-in bet.

The chip situation is now very different. Boucher is still in the lead with about 7M, but his opponents got a lot of life back and have about 4M each. It is that situation that motivated the following deal: $2,000 are taken off the 23K first prize and shifted over to the 10.4K 3rd prize.

Sébastien Morissette had taken a nice option in the race for second against Gianfranco Giordano, but was severely hurt by Mathieu Boucher. Morissette opened from the small blind and Boucher called from the big blind. Morissette kept pressing the pot with growing bets until he checked the river, which Boucher fired for a million chips. Morissette showed his flopped flush draw and mucked.

Morissette and Giordano were now about even at 1.5M, and from then on it seemed like they wanted to gamble a little bit more and several all-in cards flew. Then Boucher did the all-in move and found a call from Morissette.

Morissette doubled to over 4M chips, and Giordano was now in great need of some love from the deck, and he got it. He shoved his 850K from the small blind into Morissette and found a call.

Morissette was still in 2nd place, but a 3bet shove from Giordano stole 420K from Morissette’s stack and they were now about even at 2M each with another 12M in front of Boucher.

Then Morrissette doubled on Boucher with queens against nines. Approximate counts: