The first of 9 Live Day 1 flights in the Colossus has wrapped up with 31 players qualified for Day 2 out of the 234 entries (and re-entries) today. When time ran out on level 14 and the tournament director called for 4 more hands to be played, Karim-Olivier Kamal was perched well atop the leaderboard with over 400K in chips – and even after an unfortunate final hand, he still managed to bag a flight-leading 326,000. Next on the list as Antoine Simon with 261,500 and leaderboard “regs” like Pierre Paul Paulin and Noeung Troeung both finished strong with over 200K each.

The results of Day 1A have been added to the Colossus – Combined Day 1 Results table, where you’ll also be able to note that there are now 68 players total that have booked a spot in Day 2 of the tournament.

Here are a few shots of some of the remaining players in Day 1A of the Colossus. Play is now most of the way though level 14, and any minute now the tournament director will pause the clock and call for a set number of hands to be played to take the flight to its conclusion.

Play has just begun in level 13 in Day 1A of the Colossus, and with 47 entries remaining, the pace has slowed down somewhat as players begin to see some light at the end of the tunnel. A few players are just hanging on for life while others have already built up a Day-2-worthy stack – but over an hour left of play, no one, even the chip leaders, can really afford to be complacent!

Patrick Lacy is indeed the leader at this point (as we speculated a few minutes ago), but Pierre Paul Paulin is still prominent on the leaderboard and they are joined by Noeung Troeung, an experienced player with a knack for accumulating chips quickly.

We arrived at table 32 with 3 players going to a flop for 6,000 each. The player in the bb – Patrick Lacy – checked dark, and the cards were dealt:

Eric Richer was first to act (following the dark check by Lacy) and he chose to shove all in for 31,100. Often that would be the end of things – but not today. Bruno Fabrizio – among the chip leaders for several levels already – made a reasonably quick call and action returned to Lacy, who surprised everyone by going all in way over the top for 123,300! Fabrizio thought for a few seconds, but not that long considering that a call would mean committing about 80% of his stack… and he made the call. The hands were exposed.

Richer was drawing almost dead for his last 31K, but the turn brought insurmountable problems for both he and Fabrizio – the

gave Lacy a full house and suddenly the other two players’ flush draws were worthless. Lacy stacked a huge pot and is now almost certainly among the chip leaders in the flight as Day 1A begins to wind down.

Pierre Paul Paulin is a very experienced player who has had a lot of success at Playground Poker Club in the past – and it looks like he’s trying for another great showing. With 5 levels left to play – still quite a long way to go – he has accumulated 169,300 chips and is at the head of the leaderboard! 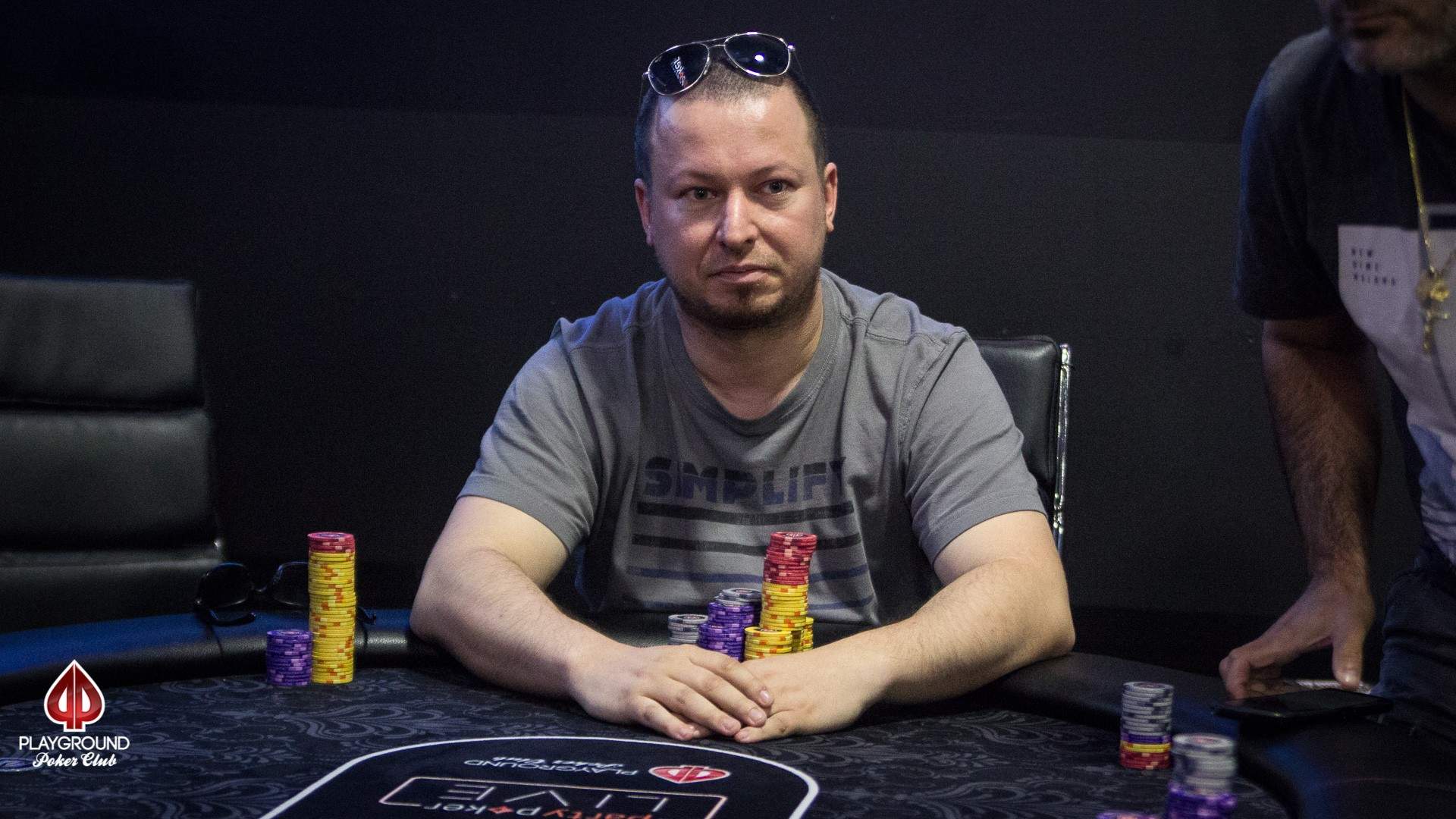 Patrick Braga, a regular crusher at Playground Poker Club, picked up a chunk of chips. 4,200 in chips were invested pre-flop by Stephan Richer, Adam Carlton and Braga. On the flop, Carlton passed, Richer put out a small 3,200 bet, and Braga called before Carlton raised it to 14,500. When Richer folded, Braga tanked for some time. He finally called.

The turn was checked by both, and Carlton passed the action once more to Braga on the river. Braga looked at his chips, thought for a bit, and shoved his remaining 35K or so. Carlton didn’t take too long before throwing his hand away.

The fun thing about this hand is the wide range of possible strong hands that Braga could have after calling the flop raise, from Carlton’s perspective. If he decided that Carlton was on the weak side, he may very well have called with the sole intention of hammering a future scare card. Who knows with this player!