Event 13 of the Playground Poker Winter Festival has just come to a close, and Nicolas Le Floch navigated through 2 days of poker to best a field of 108 players and claim victory.

This “Second Chance” Event has become a regular tournament during series that include a WPT Main Event, and offers players a “second chance” to play in a high-stakes event. The buy-in is generally around half of the cost of the Main Event – in this case players invested $1,500 + $150 into a tournament which featured a guarantee of $150,000.

Once registration was closed, the final count was of 108 entries, generating a prize-pool $157,140. The top 14 players were included in the payouts, with $47,140 reserved for the eventual winner. The event took place over 2 days, and 21 players bagged chips onto Day 2 after 15 levels of play. It took another 3 levels of play to reach the money, after which the final table came fairly quickly.

Alexandre Lavigne, who has seen a lot of success in big buy-in events here at Playground Poker Club, arrived at the 10-handed final table as the chip leader. He pulled through until the top 3, even after losing his lead mid-way through the final in a series of unfortunate hands, but was eliminated by Nicolas in a coin toss to take home a 3rd place prize of $17,440.

Heads-up play then began between Nicolas (1,892,000) and Shawn Daigle (798,000), with Nicolas holding more than a 2-to-1 chip advantage. They played for the better part of 3 levels without too much fluctuations in their stacks. Shawn did manage to chip up to over a million at some point, but Nicolas kept applying pressure on his opponent leading to the final hand.

Nicolas defended his big blind after Shawn min-raised to 65,000, and then he checked first-to-act on a

for top-two pairs, and Shawn’s

was drawing only to a 6 for a straight. The river was a

, sealing the deal for Nicolas and crowning him our Second Chance Champion.

This is the second event Nicolas has won in this Playground Poker Winter Festival, as he claimed the Champion’s Trophy in Event 9, a $500 + $50 PLO tournament. He also placed 29th in the WPT Playground Main Event, bringing the total of his three cashes in this series up to $62,355. Visiting from France, this has been quite the successful venture for him! 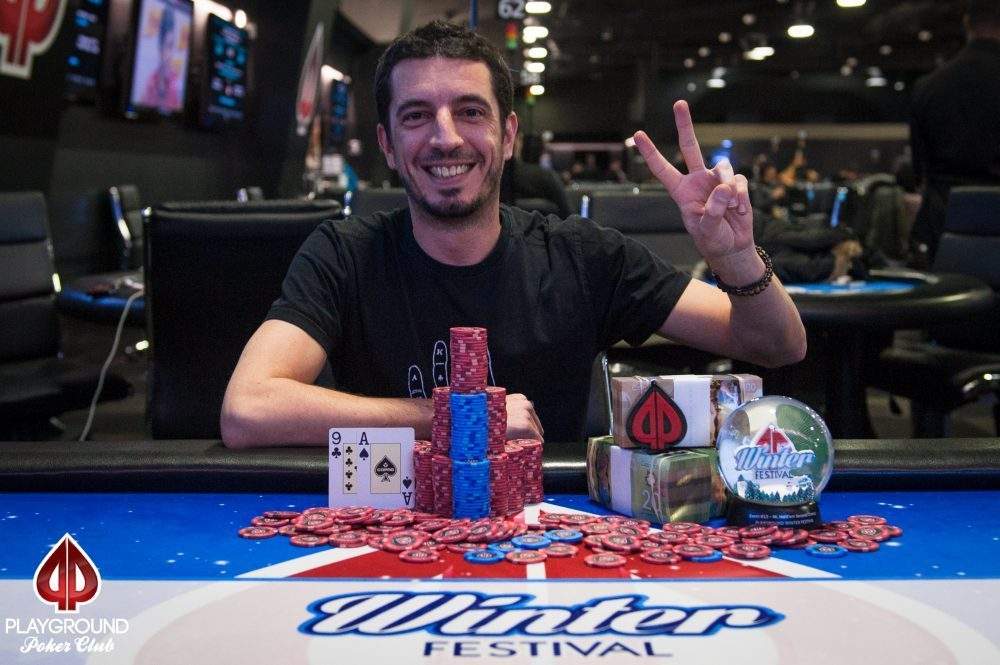 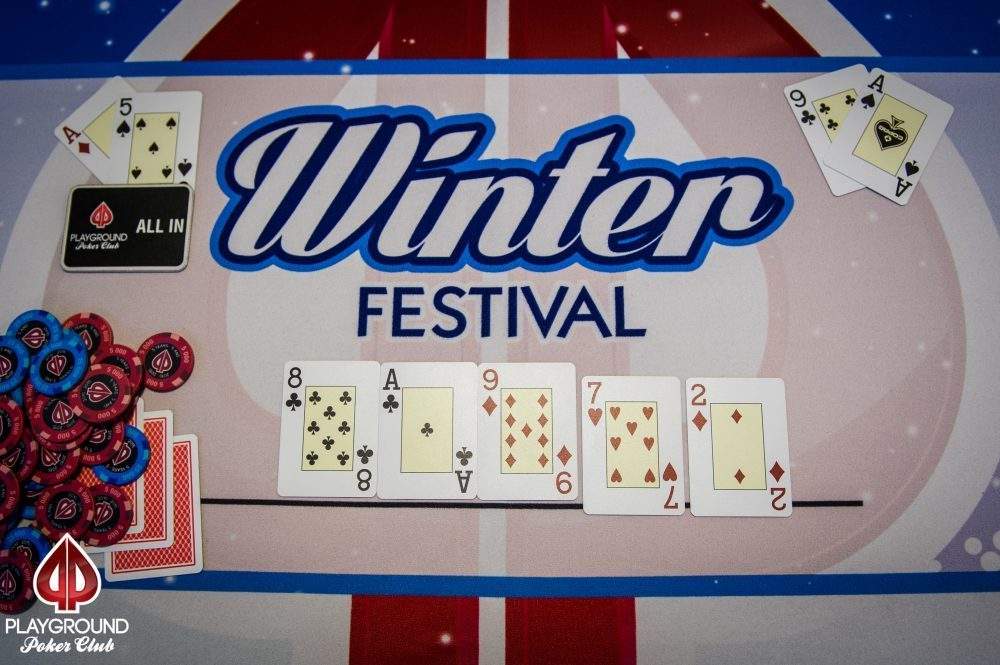 The 108 player field in the Second Chance Event has been widdled down to just 2 players as they prepare to face-off for the win, which is accompanied by a $47,140 pay-day along with a Winter Festival Champion’s Trophy.

Nicolas is gunning for his second win here at the Playground Poker Winter Festival, after taking down Event 9, a $500 + $50 PLO tournament which featured 53 entrants. Interestingly enough, Nicolas’ heads-up opponent in that event, Andrej Markovinovic, turns out to be the flat-mate of his current heads-up opponent Shawn.

The money has been laid out on the table next to the Champion’s Trophy, and the two players have just saluted each other with a fresh celebratory beer as they begin their heads-up match. 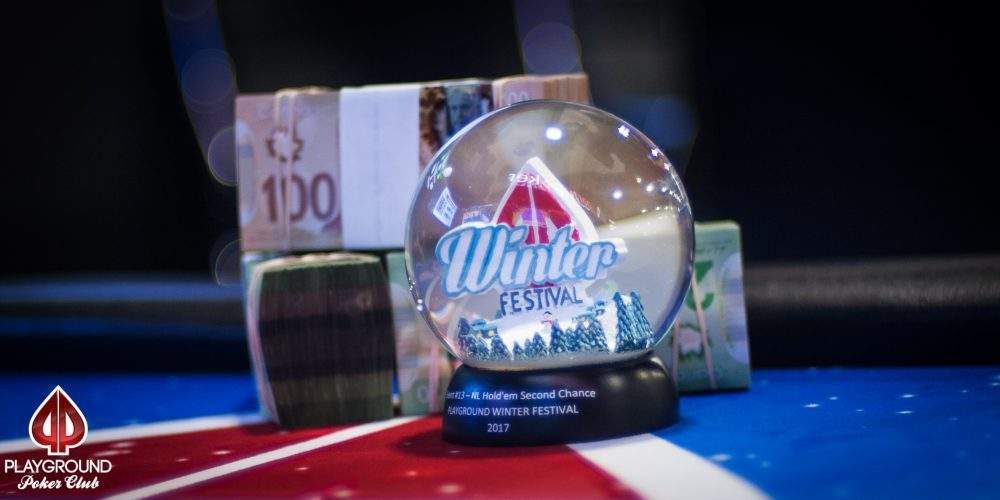 With Alexandre’s elimination, the Second Chance Event is now down to heads-up play between Nicolas and Shawn Daigle.

Jeremy doubled on the hand, and one orbit later he open-shoved again from the button, and once again found the call from Nicolas.

Jeremy got his chips in good, but unfortunately for him Nicolas spiked the turn to win the hand, bringing the Second Chance down to 3-handed.

A short break took place after the hand, and below is the chip-distribution heading into level 23:

Action folded to Alexandre Lavigne in the cutoff, who open-shoved his 220,000 stack. Chad Coombs was in the big blind with a short stack of around 120,000, and with two face-cards dealt to him he made the call.

Chad picked up a pair on the

board, but it wasn’t enough to overcome the pocket-kings of Alexandre.

We caught up to the action on the river between Nicolas Le Floch (cutoff) and Shawn Daigle (big blind).

With around 80,000 already in the pot and the board showing

, Shawn bet 52,000 first to act, and went into the tank when Nicolas raised to 167,000. After some thought, he threw in some calling chips to reach showdown. Nicolas tabled

, and was bested by Shawn’s