After a full hour of play since the bubble burst, and with the end of the night in view, there have already been over 60 eliminations in the Main Event, bringing the field down to a very manageable 224 players as the tournament director made his announcement to play the final hands of the day. This has certainly come along with considerable chip-ups by some of the largest stacks, so when the final counts for Day 2 are released after Day 2 comes to a close, we should see some huge stacks that players will take to Day 3.

Two players in particular were very happy that the bubble didn’t play out any longer – Tomislav Pavkovic and Ken Stutz were both extremely short when the bubble arrived but were able to stay alive just long enough to get into the money before the blinds came back around to them. 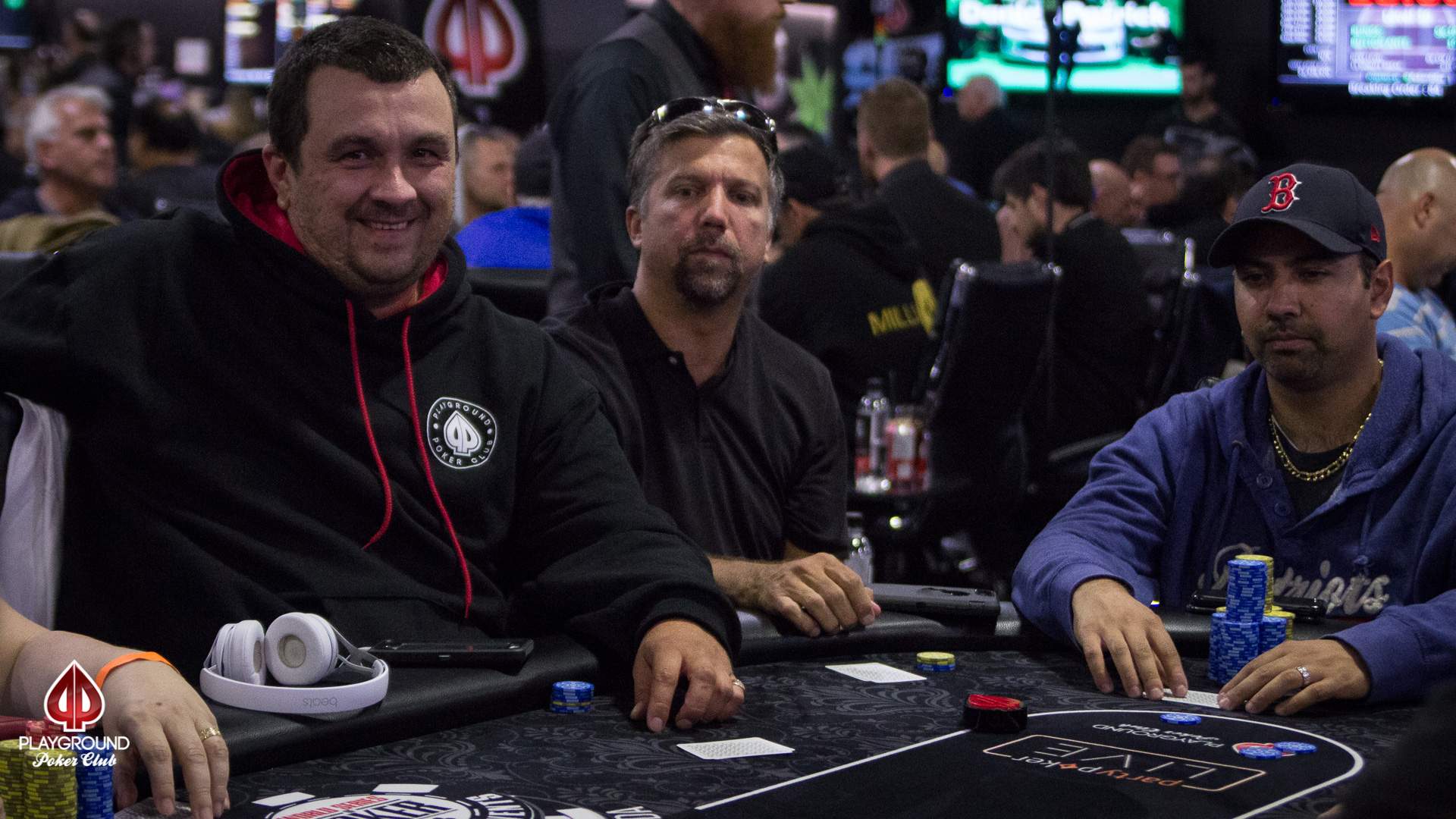 The bubble has burst in the Main Event of the 2018 WSOP-C Playground. The payout schedule, released today after registration closed at the beginning of level 13, called for 287 players to be paid in the tournament, with a min-cash of $2,250. With a few tables still active in the Tournament Tent, and to make sure hand-for-hand play proceeded in an absolutely fair manner, the clock was paused with 290 players remaining. A table was broken to take the tournament down to 29 tables with exactly 10 players each. Before that could happen – in the last hand played when the clock was paused – a player was eliminated in the Tournament Hall to take it to 289 players.

Then hand-for-hand play began, with the clock paused on 26 minutes remaining in level 19. On the second hand of hand-for-hand play, one player was eliminated in the Tent, bringing the field to 288 players – the stone bubble. Play continued one hand at a time, with tournament staff in the Hall coordinating via walkie-talkie with the Tent, and on the 5th hand total, the fateful hand arrived.

When we arrived at the table, there were two players all in – Sebastien Labbe and Mario Lepine. Hal Rotholz, who only had to contribute another 20K to the 100K+ he had already bet in the hand, was just delaying to make the call knowing that the action was paused until the action was complete on all other tables. He was never folding, clearly, and after a few seconds he made the call. Mario and Sebastien were both shorter-stacked that Hal – he could have taken them both out – and Mario was significantly shorter than Sebastien.

There was also an all in and a call on another table, and once it was clear that these were the only two tables left to settle their hands, the dealers were asked to proceed. First thing – on the other table, the short-stack doubled up. And on the table in question, all hands were exposed:

The board, once it was run, was almost anti-climactic –

. Sebastien’s Kings held, Mario was eliminated on the bubble, and Hal shipped some chips over to Sebastien… and everyone was in the money!

This is the beginning of the second-last level of the night, and with just two levels to play, the bubble is certain to hit tonight – and maybe relatively soon. During the recent break we looked around the tournament for stacks of over 1M in chips, and found that Eric Afriat has accumulated even more than when we posted just a half hour ago – in fact, he’s the overall chip leader going into this decisive stretch in the tournament.

Play continues at a fairly steady pace in the Main Event, and there are now just 308 players left in the tournament. The last players will be coming in to the main Tournament Hall before long, and with the bubble just 21 players away, we’re likely to see a slight slowdown in the pace of things – though in fields this large, sometimes people don’t adapt that much to the situation. 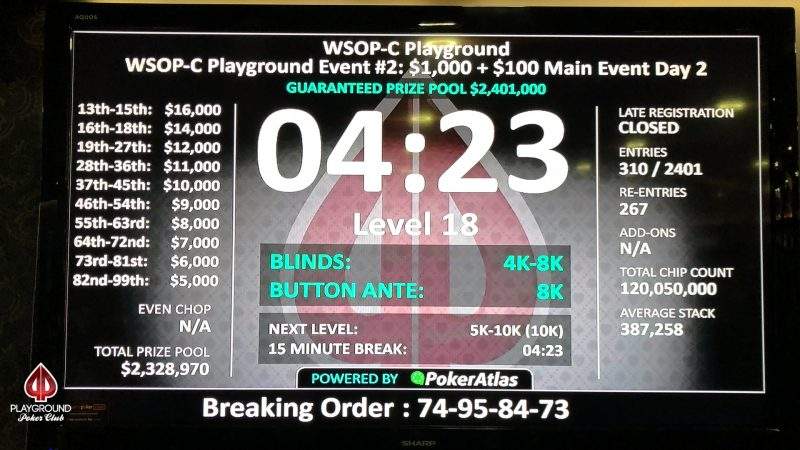 Eric Afriat is one of the most decorated players in the Montreal scene, and he’s known both here and pretty universally these days as a player who can accumulate chips in a hurry – and relentlessly. He’s now up over 1.1M in chips, and we saw him pick up at least 150K in new chips in a hand just moments ago.

We arrived at the table on the turn in a hand that was playing blind on blind between Eric (bb) and Ben Underwood (sb). The board read

and Ben had a 35K bet in front of him with a healthy preflop and flop pot already collected. Eric chose to raise to 100K and found a call. The river came

and Ben checked, only to face Eric’s bet of 250K. Ben thought for several moments but eventually folded – and Eric collected the pot. It’s these little-danger pots that Eric picks up that makes him such a threat in every tournament he enters.

There are interesting situations in all corners of a tournament of this nature, but sometimes in a tournament a particular table stands out. In this case it’s table 35. Mike Sexton has been seated there all day, which accounts for some of the attention, but it’s not only that there’s a player of his stature seated.

The table has also been anchored throughout the day by players like John Palmer, and (since around 2:00pm) by Faisal Khan. Take a group of skilled but sociable players and it’s bound to be interesting. Earlier in the day we saw John take out Alexander Wong, a very accomplished player from Ottawa, and more recently, local hotshot Chanracy Khun was eliminated. Taking his space is none other than race car driver Isabelle Tremblay – someone who always adds some fun to the table.

The most interesting thing, however, may be that Faisal Khan has managed to grow his stack to pass the 1M mark. Try as we like, at the end of the day it’s the stacks of chips that really count!