Play in the Main Event has been paused for the day as the end of level 30 has come and gone and players have bagged up their chips to return to play tomorrow at 12:00pm for Day 4. There are 21 players remaining, which means there will be a seating redraw to start play tomorrow, and then another one at 16 players remaining and another for the final table.

The final level of the night saw some fireworks as the chip leader at the last break, Chen Turjeman, was eliminated in a wild hand. We weren’t able to get all of the details, but this is the hand history in ts essentials:

Walide Zazouh has been making his mark on the entire tournament with his high level of excitement. In the hand, he chose to limp (120K) from early position and it folded around to Chen, who raised to 720. Action was back on Walide, who said, “a million more” but followed this with a question “can I make it a million”. The initial declaration was non-standard but absolutely clear, and the floor confirmed that his raise was to 1.720M. Back to Chen… all in for just over 3M in chips. Walide made the call.

Improbably enough, the flop came King-Trey-Deuce (we don’t have the suits) – Chen took the lead! But the turn

put Walide back in front – and elicited a loud response from the young supposed first-timer! The river King sealed it – Walide was up over 9M while Chen was sent to the desk to get his payout coupon.

The chip leader to end the day is none other than Nathan Hall, the winner of the partypoker LIVE Dollars $50K Last Longer. When he won the prize, he was visibly relieved and stated openly that the promo was seriously affecting his game. After booking that victory, he told us later that he was able to open up his range considerably and play in a manner that was much more comfortable to him – and the 11,690,000 chips he finished the night with are evidence that he was speaking the truth.

Play resumes at 12:00pm on September 3rd here in the Tournament Hall at Playground Poker Club, and play will continue until there is a Champion in the event.

Here is a relatively large gallery of photos taken on Day 3 in the Main Event since the dinner break. Some of these player have been eliminated since their photo was taken – some of the photos were taken two hours ago, while some are “fresher” than that.

Eight levels have been played today, which means that only levels 29 and 30 remain to be played before the remaining players bag up their chips for storage until Day 4 tomorrow. There are just 29 players left, and the pace has clearly slowed down considerably since earlier in the day as everyone feels the amped-up pressure of trying to make the final day in the event.

There have been small pay jumps throughout the day, but in the past half-hour or so a major threshold was reached – the min cash from here on out is a 5-figure number. Here are the chip leaders as counted during the last break. 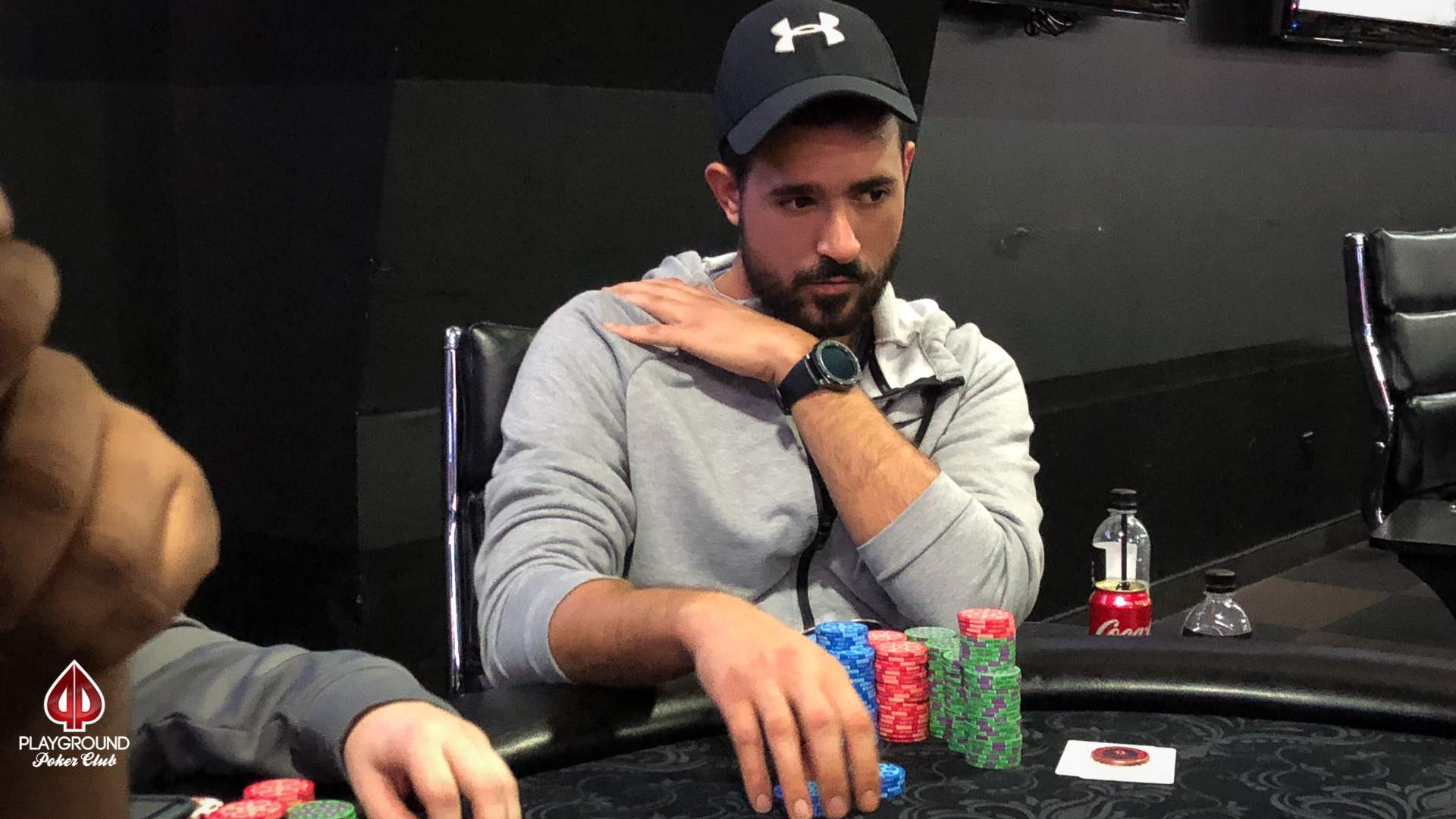 One of the partypoker LIVE promotions for the WSOP-C Main Event was a $50,000 Last Longer contest. To win, the player had to go deeper in the tournament – to literally last longer – than any other qualified player. The prize? $50,000 in cash!

To qualify, all a player had to do was to buy in to the Main Event using partypoker LIVE Dollars that they have accumulated on partypoker!

The contest was anonymous, so no one knew if a player at their table was entered pr not, and the participants really flew under the radar – but at around the dinner break, we knew there were just two players left – and when Sebastien Gelinas was eliminated in 38th place – the last player standing won the prize!

The winner is… Nathan Hall! Congratulations!

Walide Zazouh is a recreational player who also happens to be one of the most exuberant players in the tournament – and he’s also the chip leader at the dinner break with 6.310M in chips.

Mike Leah is also on the list in second place at this point, which is quite a feat considering that Mike has had an average or below average stack for most of the tournament, and also because Sunday is an important day for all online players, which Mike definitely is. Nevertheless – the pay jumps have started to get a little more interesting, so it’s not surprising that a pro like Mike would find a way to accumulate chips in a hurry when he needs them.

Ranbir More has spent some time near the top of the leaderboard since the bubble burst, but his stack had dwindled to just 1.1M until this huge hand on table 24 gave him a much-needed boost. The hand ended up being a 3-way all in and it could end up having huge implications for the balance of the tourney.

Ranbir opened the action with a preflop raise to 100K from the hijack, which was instantly met with a raise to 275K by Sam Chartier, directly to his left in the cutoff. Action folded around to Joao Vitor Petenel in the bb, who made the call. Action was back on the original raiser, Ranbir, who, without much delay at all, decided to shove all-in for his last 1M.

Sam covered both players by a wide margin – he had picked up well over 1.5M compared with the stack we counted just a half hour previous. He decided to use that stack and any fold equity it gave him by going all in over the top of Ranbir. Joao Vitor made the call anyhow, and it was a three-way all in. The hole cards were exposed.

Joao Vitor let out a yell on the

flop – not noticing that while he had made a set of Jacks, Ranbir had hit his own set of Kings! Sam could only watch with little to hope for, and then nothing following the turn

. The river was a meaningless

– Ranbir had tripled up!

Notwithstanding having shipped 1.1M to Ranbir and another 750K to Joao Vitor, Sam is still playing a top-5 stack in the event at this point, and clearly he has more than enough experience to deal with an outcome like this.