Event #13 of the Winter Festival was a $300+$30 Re-Entry NL Hold’em tournament that attracted 79 entries and 4 re-entries. The number of participants fell short of the guarantee but provided great value for the players who entered.

The evening was characterized by relatively tight play throughout most of the early going, as few players seemed inclined to re-enter and most treated this tournament as a freezeout. The field shrank slowly and steadily until they were down to three tables, when the action heated. There were a flurry of bustouts in quick succession that brought about the final table more quickly than any of the players anticipated.

Once play began at the final table one player, Daniel Pepin, had a massive chip lead on the field and all the other players had roughly equal stacks. Play carried on somewhat predictably, with the short stacks succumbing to the pressure of the blinds. When the final table was down to five players, they agreed to a deal that would see the chip leader, Daniel Pepin, take home $6,100.00 with everyone else to receive $3,950.00. There remained $600.00 and the champion’s trophy for the eventual winner.

After the deal was concluded, nearly every hand was all in before the flop; the players were happy to take their chances after guaranteeing their payout. The result was three quick eliminations, including the chip leader at the time of the deal. After a few hands of heads-up play, John Yang Huynh got the best of Debra Ann Holman and was crowned champion. 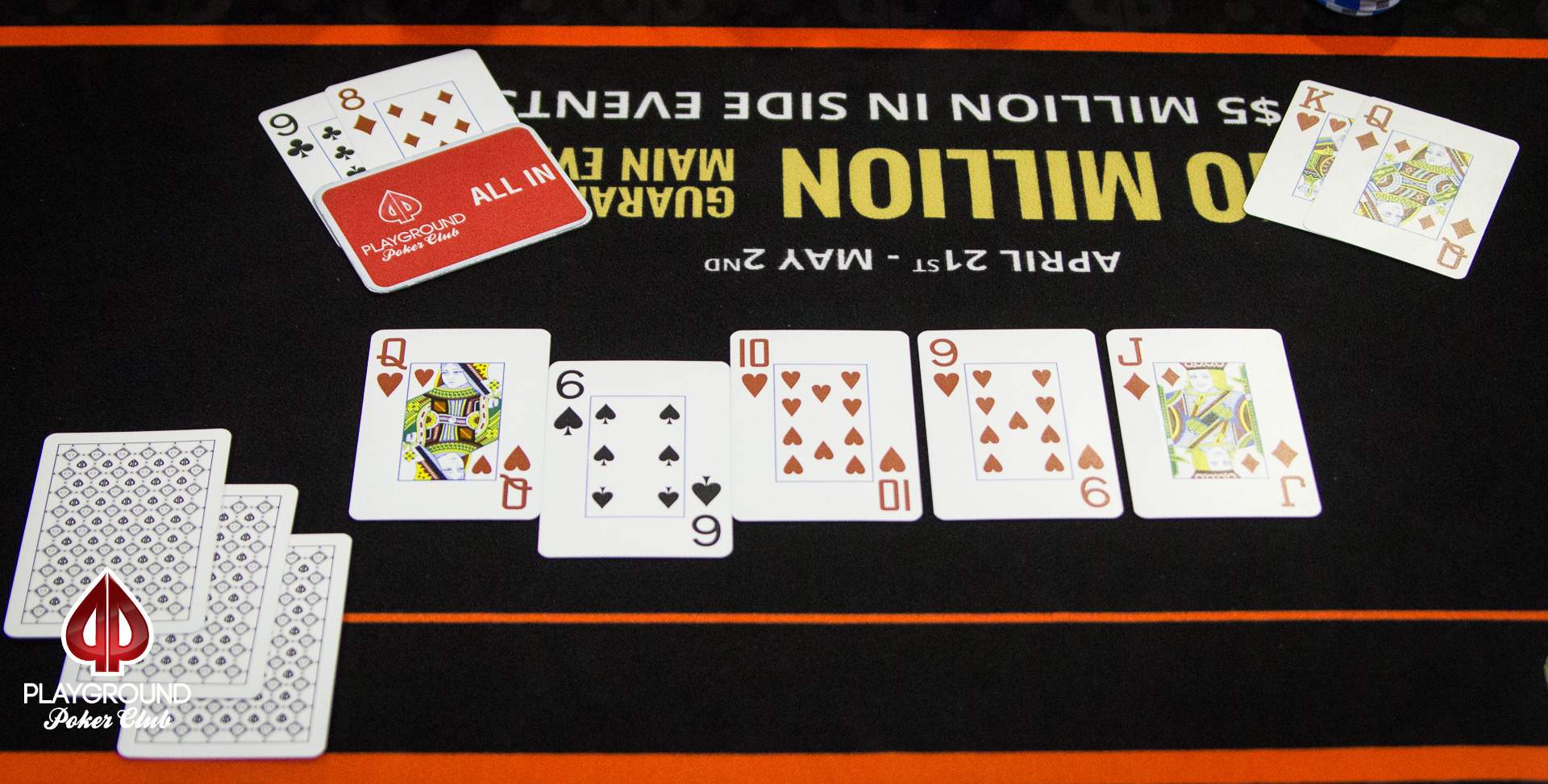 Jaered Daniel Besse has just left the final table in sixth place. Besse’s run came to an end despite solid play at the final table when his aces were cracked. Daniel Pepin had opened the betting from under the gun, after the action folded around, Besse moved all in from the small blind. Pepin made the call and hands were tabled.

Jean-Simon Turcotte was the next player to leave the final table in a dramatic three-way all in. John Yang Huynh was the first to move all in before the flop, followed by James Belanger, immediately to his left, and finally Turcotte.

Yang Huynh’s flush draw on the turn gave Belanger a sweat, but the queens ultimately chopped and Turcotte hit the rail in ninth place. Turcotte took home $990.00 for his efforts.

Shijaudin Daud Sha, widely known as Lee, was eliminated in eighth place. Down to a short stack after losing a couple of pots on the final table, he patiently waited for his spot. That spot finally came when he woke up with

on the button, and he called off his stack after the chip leader, Daniel Pepin, had made an opening bet. Pepin tabled

; it was a race. Pepin took the lead on the flop of

, and Lee could not catch up with the

. After John Yang Huynh re-raised all in, she knew she was in trouble. Yang Huynh tabled

and Vera rose from her seat. The board,

, did not affect either hand and the queen kicker was enough. Vera G took home $1,610.00 for her seventh place finish.

Sean Edelenbos, who had a massive chip lead at the midway point of the tournament has just been eliminated in tenth place. Edelenbos who had been on a short stack since shortly before the final table was doubled up earlier by Debra Ann Holman. Even with the double up, Edelenbos was the short stack at the table. Edelenbos had moved all in from early position before Jaered Besse went all in over the top from the small blind.

Edelenbos will take home $660.00 for his ninth place finish.

They have played down to the final table in Event #13, the $330 Re-Entry. The bustouts were few and far between for some time prior to reaching the final three tables, but since then the players have been leaving in quick succession. The pace picked up even further once they were down to two table, and they got to the final table within one blind level, thanks to some hands that saw multiple players bust.

Play is now resuming on the final table where Daniel Pepin has a commanding chip lead.