Sasan Mehrabian has been crowned champion of Event #4, the $250 Frenzy. Throughout Day 3 of the Frenzy, Mehrabian played consistent, mistake-free poker and capitalized on his opportunities to outlast 802 other players on his way to victory. The win earned Mehrabian $25,070 and the champion’s trophy.

At the final table, play loosened up after the players agreed to an ICM chop, and Mehrabian reaped the benefits as he won pot after pot. After eliminating the third and fourth place finishers, Mehrabian had a huge chip lead, covering his last opponent, Tanvir Ahmed, by more than a 3:1 margin. After a few folds back and forth, Mehrabian and Ahmed found a spot to go all in before the flop and play for all the chips. 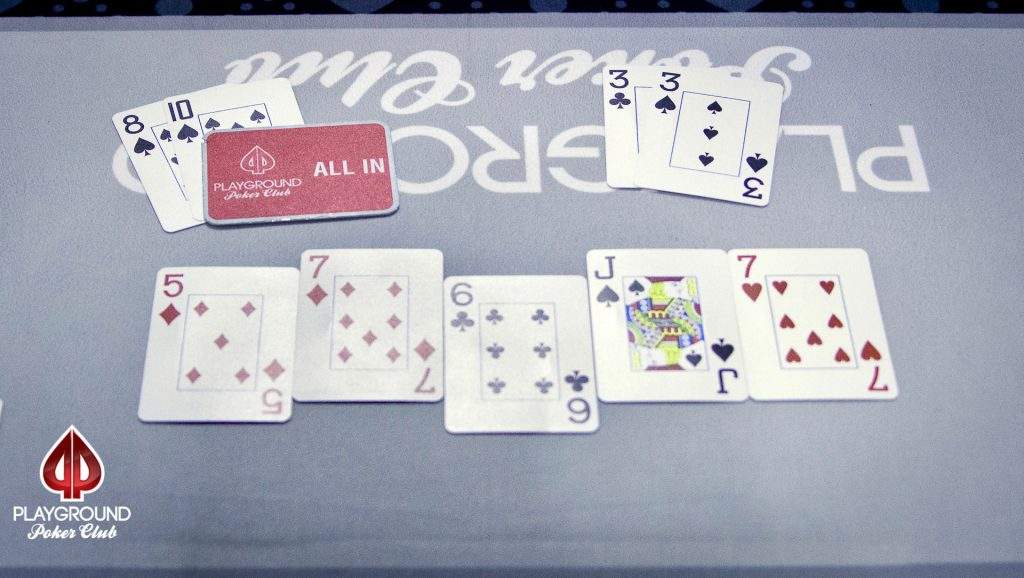 Shailesh Patel had the chip lead when the players agreed to a 4-way chop, but he lost a series of hands and hit the rail in third. Patel’s last hand was a pre-flop battle of the blinds, when he moved all in from the small blind with

and got called by Sasan Mehrabian in the big bling with

, didn’t help either player and ace high was good enough. Patel will take home $29,050 for his deep run.

With the players having just agreed to an ICM chop, Giancarlo Santolin was happy to gamble his chips to try to take down the $250 Frenzy. He looked down at

and, with the blinds at 50K/100K, decided to take his chances and moved all in. To his chagrin, he ran into Shailesh Patel’s

. With a runout of

The remaining players have agreed to an ICM chop. They will be leaving $4,000 to play for as well as the coveted trophy and bragging rights.

Here is what they agreed to:

Richard Book’s run in the $250 Frenzy has come to a close. Running low on chips, Book moved all in from under the gun with

. Shailesh Patel, in the small blind, made the call with

. Patel took the lead on the flop of

, did not deliver Book his two-outer and he left in sixth place with $8,000 for his trouble.

Shaan Siddiqui started the final table with lots of chips and momentum, but they both ran out when he busted in 5th place. After having lost a good portion of his stack, Siddiqui found himself in the small blind facing a button shove from the chip leader, Shailesh Patel. After only brief reflection, Siddiqui called it off with

. The board ran out

, and Patel padded his chip lead. Siddiqui will take home $10,500 for his fifth place finish.

Philippe Oligny-Lauzon was just eliminated from the final table of the $250 Frenzy in 7th place, earning him $6,000. His last hand was a familiar flip. Oligny-Lauzon moved all in with

and got action from Sasan Mehrabian who held

, ruined the sweat for Oligny-Lauzon. The runout of

sent him to the rail in 7th.