After only a few hands of heads up play comprising no major shifts in the chip distribution, Jason Mottershead has won The Crazy $80, Event #2 in the 2018 Playground Winter Festival.

Both heads up players – Mottershead and Francis Dery – played a model final table; indeed, a fantastic final three tables. Both players were driving the action, making the plays, bringing the game – and it served both of them well all the way along as they were both able to chip up in bursts by eliminating others and staying out in front of the ever-growing blinds as the day wore on.

The final hand was pretty standard stuff. Francis acted first in the button/sb and chose to open shove his

. Jason looked at his cards and very calmly and quietly uttered the fateful word: “call”. He flipped over

– and both players waited for the flop.

Something for both players, but only the most optimistic would be overjoyed to have caught the

on that board. And such optimism would have been misplaced – the turn was the

and the river a meaningless

A word about Jason Mottershead. He has been visiting Playground Poker Club for festivals since the very beginning, and has had countless Day 2 qualifications, deep runs in single-day tournaments, and otherwise dominating performances. However, until today, he had never actually won a festival event at Playground Poker Club. So a little extra dose of congratulations are in order! 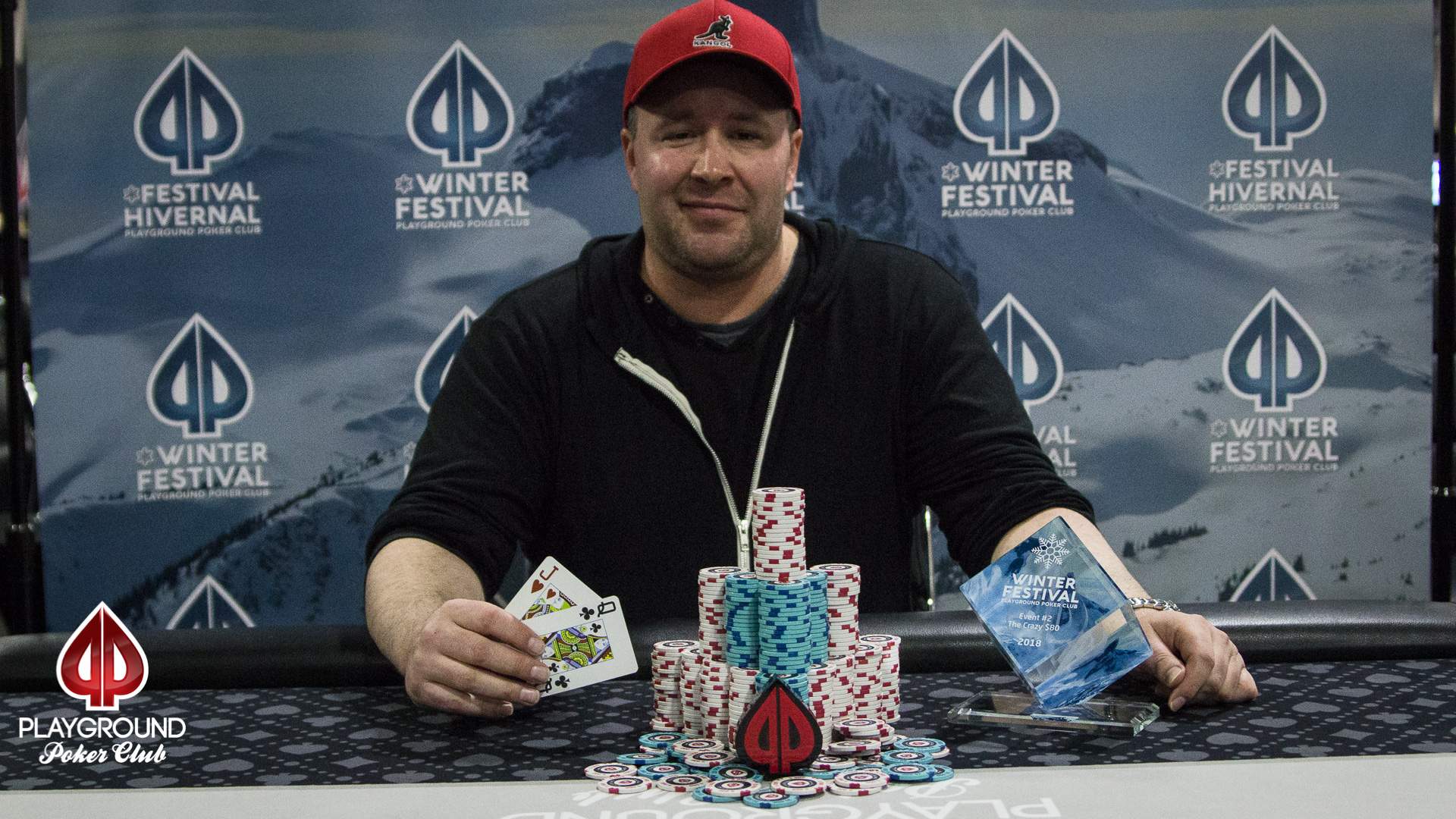 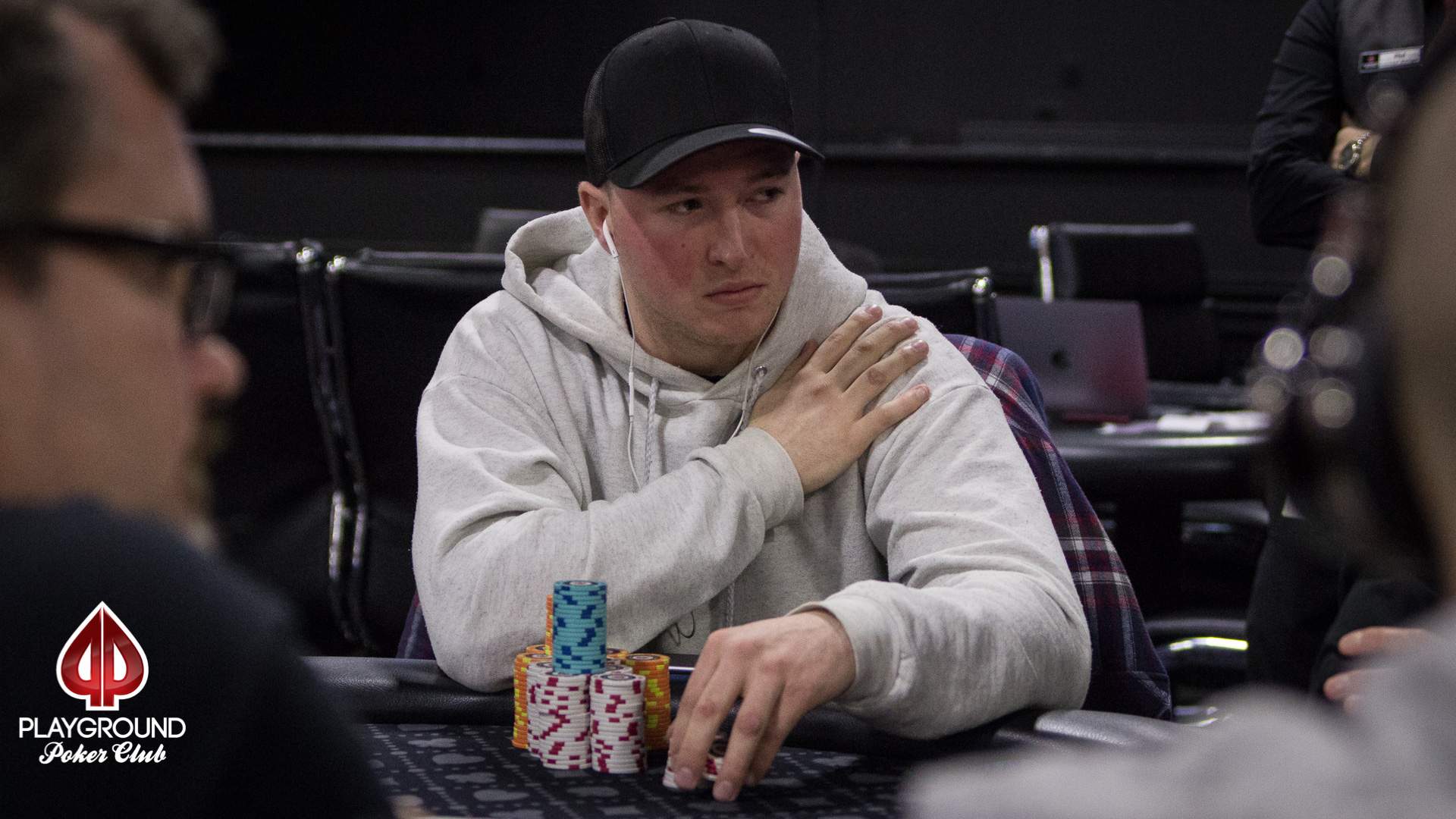 Final hand of play in Event #2 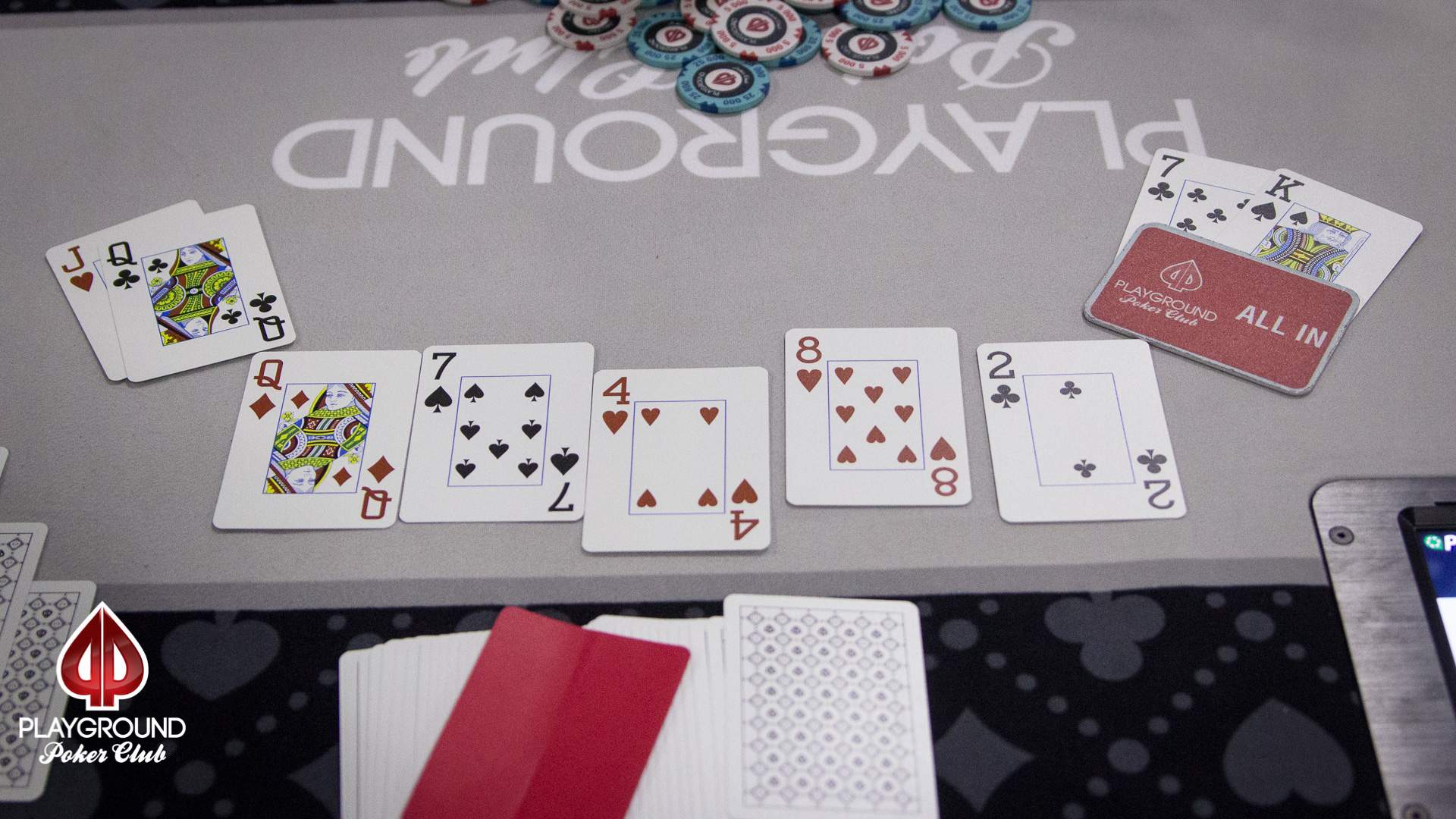 Here are some shots of the beginning of heads up play between Jason Mottershead and Francis Dery. Mottershead goes into the 2-way match with at least a 5:1 chip advantage.

There are now just two players left on Day 2 of Event #2 in the 2018 Playground Winter Festival. Stephane Senez and Trevor Dixon were both eliminated by Jason Mottershead in back-to-back hands – and now Mottershead is heads up against Francis Dery with a massive chip lead.

Trevor Dixon was eliminated when his

(the board ran out

), and Senez was shown the door when his

on a Queen-high board. 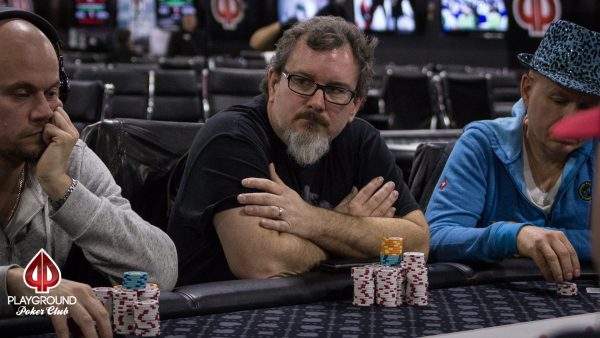 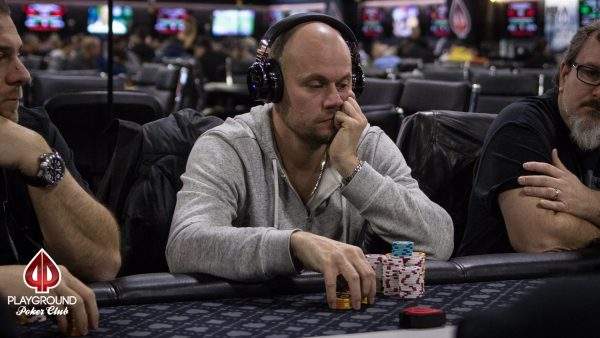 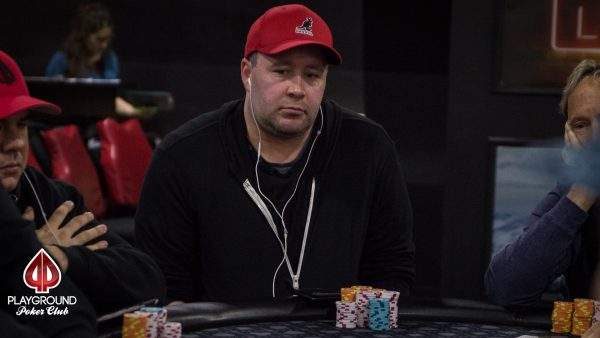 There are just 4 players left in Event #2 and they just took a short break during which we were able to get full counts for all of the players. Jason Mottershead is the clear chip leader at the moment with more than half of the total chips in play, but it’s safe to say that it’s still anyone’s game.

Arnie Maloney is easily recognized at the table by his usual colourful and often shiny hats – but he distinguished himself this week with canny, well timed plays that saw him make it all the way to the final table.

On his final hand in the tournament, he was facing Jason Mottershead’s raise to 90K in the bb – and with 40K invested and just 325K behind, Maloney chose to go all-in over the top. Mottershead made the call without a lot of deliberation – and when the hands were flipped over it was evident that he had had a pretty clear idea of where he sat when he made the call.

– was clearly good for Mottershead, who took the lead, but also presented Maloney with additional outs compared with what most alternatives would have given him. Alas, the

river were of no help and Arnie – and his shiny blue hat – hit the rail. 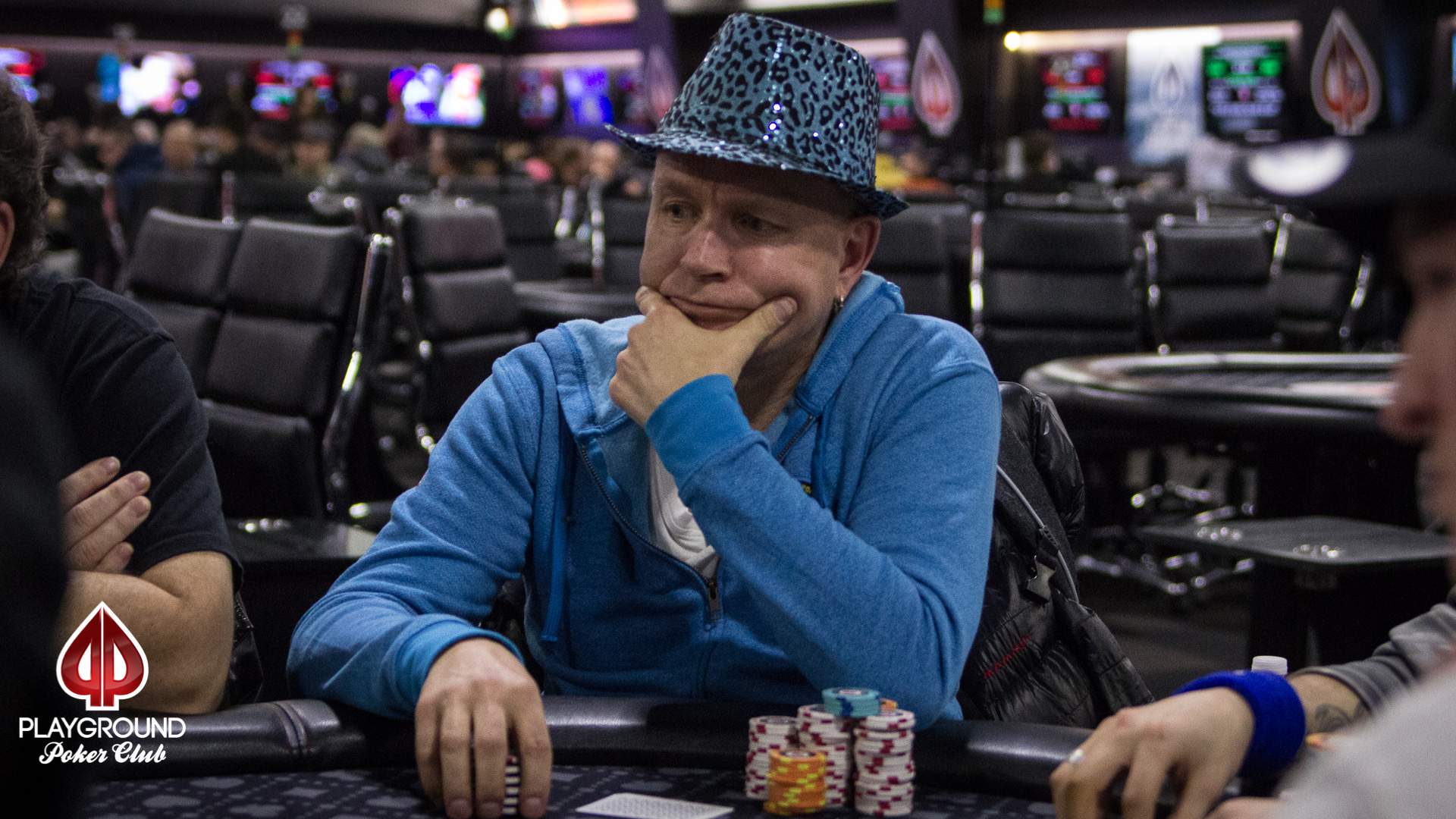 Francis Dery has been very active at this final table and his activity has paid off so far. Just now, he took out yet another player to re-take his position as chip leader in the tournament with just 5 remaining.

On the fateful hand for Alexandre Douville, who was eliminated, Dery open raised to 75K and Douville shoved over the top for 300K. Once the count was confirmed, Dery made the call and flipped over

, earning a groan from Douville who turned over

. The board ran out clean for Dery and Douville hit the rail. 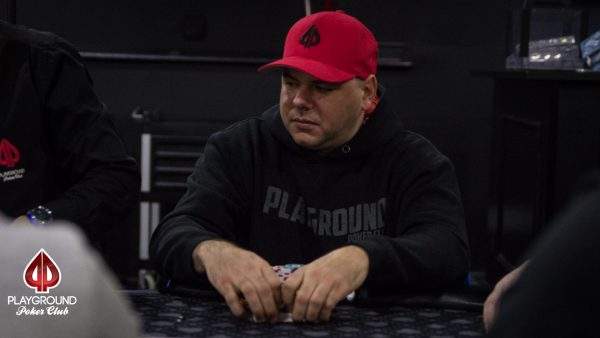